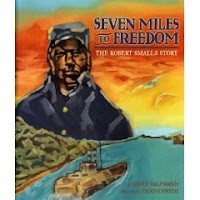 AUTHOR: Janet Halfmann
ILLUSTRATOR: Duane Smith
Review copy provided by Lee and Low
Have you heard of Robert Smalls? I hadn't, at least not until I read this beautiful new biography. Now,  I can't wait to introduce to my students and my sons to Robert Smalls.
Smalls was born in the slave quarters of the McKee family plantation in Beaufort, South Carolina, in 1839. His mother was a house servant, and Robert soon began working in the house as well. He was smart and talkative, and quickly became Master McKee's favorite servant. As such, Robert had an easier life than most slaves. Even so, he witnessed the evils of slavery- cruel beatings, children sold on the whipping block, and families torn apart. He grew to despise slavery.
When Robert was 12, he was sent to Charleston to work in a hotel. He was fascinated by boats, and soon convinced Master McKee to allow him to work in the shipyards, where he sewed and rigged sails, and became known as one of the best boat handlers on the water. During this time, he also married Hannah Jones. When they had their first daughter, Elizabeth, Robert was saddened to realize that the child actually belonged to Hannah's owner. He determined that somehow he would earn $800 to buy his wife and child, so that the family would never have to worry about being torn apart.
By the spring of 1861, the southern states had seceded from the Union, and the Civil War had begun. There was very little commercial boat traffic in or out of Charleston, so Robert took a job on the Planter, a 147-foot wood burning steamer. On May 12, 1862, Robert and other members of the crew boldly stole the ship, loaded with four Confederate cannons, used a rowboat to pick up their families, and sailed out of the harbor and past several Confederate forts, finally surrendering the boat and the four cannons to the Union navy. In an afterword, we learn that Smalls was later declared a national hero, and convinced Abraham Lincoln to allow African Americans to enlist in the Union army. He helped draft the constitution for the state of South Carolina, and served as a member of the United States congress. Unfortunately, he was also one of six African American delegates who refused  to sign an amendment to the state constitution when South Carolina repealed African American's right to vote in 1895.
This is a terrific story of an amazing Civil War hero. The illustrations, done by Duane Smith, are stunning, oil paintings in all hues of blue, turquoise, green, orange, and gold. The paintings are really different, lots of really broad brush strokes, with the details being done in different shades of the same color. It's hard to describe, but I could see art teachers using Smith's work to teach students about oil painting. This is Smith's first picture book, and he goes right under Kadir Nelson on my list of favorite illustrators.
A great book for African American history month, or a unit on the Civil War, or heroes, or bravery, or biographies…
Posted by Carol at 10:26 AM

Thank you so much for reviewing Seven Miles to Freedom. I am so grateful that I came across Robert Smalls' story and was able to tell it.