THE LAST BLACK KING OF THE KENTUCKY DERBY 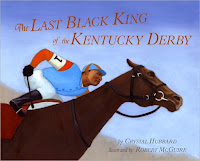 This weekend my son's basketball team lost a really tough game.   The boys are eighth graders, many of them have been together since first grade, and we're in kind of a bittersweet time, because next year they'll be splitting up and heading off to different high schools.
This loss was an especially tough one for several reasons. First, they won this league last year and really wanted to do it again. Second, the team that won is a team they beat 90% of the time. Third and hardest, the team wasn't lost by the kids, it was lost by a referee, when he allowed the other team to take one too many free throws. They won by one point. That extra free throw put them ahead, when really the game should have been tied at regulation and gone into overtime.
Talking about it later, all my son could say was that it wasn't fair, that they had not really lost the game. And I had to agree with him, they hadn't. All I could say was that sometimes life was not fair and sometimes people in authority behave in dishonorable ways. Sometimes we can't do anything about injustices that are done to us. All we can do is take charge of our attitudes and our behaviors. And sometimes it is  really hard.
Then I thought of Crystal Hubbard's wonderful new picture book, THE LAST BLACK KING OF THE KENTUCKY DERBY. The LAST BLACK KING is the story of Jimmy Winkfield, an African American jockey and horse trainer. Winkfield rode in the Kentucky Derby in 1900, 1901, 1902, 1903,  finishing third in 1900, winning the race in both 1901 and 1902, and coming in second in 1903. Given his tremendous success, one might have expected that he would have gone on to ride in the Kentucky Derby many more times. Surprisingly, Winkfield never rode in the Derby again. In fact, since 1902, however, no African American jockey has ever won the race. Winkfield truly was the "last black king of the Kentucky Derby."
Why, after such finishing in the top three for four years running, did Winkfield not compete again? The answer is simple. He was black. Racism was prevalent. The Kentucky Derby was a big purse for jockeys. Other jockeys were given preferential treatment because they were white. Jimmy Winkfield finished his career as jockey in Russia, where he won many races, married a Russian heiress, then had to drive a herd of thoroughbreds out of the country during the Russian Revolution in 1917. He emigrated to France, where he had to defend himself with a pitchfork during World War I. Life truly wasn't fair. And yet Winkfield made choices, again, and again, and again, which allowed him to survive and thrive in spite of other people's wrong actions.
Robert McGuire's colorful, beautifully detailed illustrations greatly enhance this story. My favorite is a picture of all of the horses running, where McGuire went so far as to use a sponge or splatter painting to show the dirt/mud coming off the horse's hooves. Amazing illustrations!
I shared this book with my fourth and fifth graders on Friday, and with my son this weekend. This week we will read Kadir Nelson's WE ARE THE SHIP. The kids I teach and love need to know how to respond when life treats them unfairly. They need to know that people can rise above very difficult circumstances…
Posted by Carol at 6:37 AM