IN DEFIANCE OF HITLER: THE SECRET MISSION OF VARIAN FRY- Carla Killough McClaffery 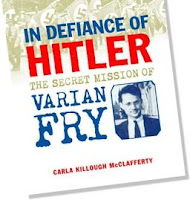 I want my sons and the kids I teach to understand that heroes aren't necessarily people who ride in limousines, or  make lots of money, or have been gifted with athletic ability. Instead, I want them to understand that heroes are ordinary people who show extraordinary courage and character in the face of difficult situations. I've definitely found a new favorite today!
Varian Fry was an American journalist who travelled to Germany in 1935. While he was there, he witnessed a horrific riot, where Germans dragged Jews out of their workplaces and cars and beat them mercilessly, simply because they were Jews.
In 1940, Fry became a member of the newly formed Emergency Rescue Committee (ERC), a group formed to help rescue trapped artists and intellectuals, including artists (e.g. Marc Chagall), writers (novelist Heinrich Mann) and scientists, from the throes of the Nazi invasion in Europe. The organization asked for a volunteer to travel to Europe to do what they could to help rescue some of these people.  Fry left behind his career and his wife, and flew to Marseilles, France, with a list of names, and $3000 taped to his leg. He planned to stay approximately one month.
The mission proved much larger and more difficult (and dangerous) than people expected, and Varian Fry ended up staying a year, not leaving until he was forcibly removed. Fry and his committee, fed and cared for refuges, gathered needed paperwork, forged documents, hiked with people over the Pyrenees from France into Spain, arranged transportation to the United States or other countries. When it was over, Fry, and a small group he had assembled, had rescued approximately 2000 people from the hands of the Nazis.
Varian Fry truly was an ordinary man who demonstrated extraordinary character and courage in the face of very difficult circumstances. I'd add this book to any middle or high school unit on the Holocaust or on heroes. It's an exceptional story!
Posted by Carol at 7:29 AM