11 PLANETS: A NEW VIEW OF THE SOLAR SYSTEM by DAVID A. AGUILAR 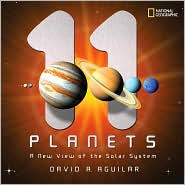 In 2006, astronomers surprised the world with the announcement that Pluto had been reclassified. The ninth planet was no longer a planet, instead it was a dwarf planet. As a person who has spent her entire life living on one of NINE planets, this was more than a little troubling to me. No more!
David Aguilar's 11 PLANETS: A NEW VIEW OF THE SOLAR SYSTEM  presents a whole new framework for understanding our universe. The planets are broken into three groups- terrestrial (Mercury, Venus, Earth and Mars), gas giants (Jupiter, Saturn, Uranus, and Neptune), and then the dwarf planets (Ceres, Pluto, and Eris). Aguilar devotes a two-page spread to each of the eleven planets. The left page is a full color painting. The right page contains the text, another picture or labeled diagram, and a small captioned picture about the origin of the planet's name. Additional two-page spreads explain other extraterrestrial bodies such as moons, meteorites, and comets.
David Aguilar is the Director of Science Information at the Harvard Smithsonian Center for Astrophysics.  His voice in his book is knowledgeable, but it's also very kid- friendly, e.g. "Unlike any other planet in our solar system, Uranus has a 98-degree tilt to its axis. Scientists think that really early in its history, it was hit by something really big that knocked it completely over on its side."
Aguilar's space artwork has been exhibited in galleries nationwide, and I can see why. The artwork in this book is breathtaking; careful captions also make it a terrific teaching tool, e.g. "An ice sheet on Jupiter's moon Europa is a perfect viewing place. From here, we can see the Giant Red spot- a hurricane that has raged for hundreds of years. Astronomers believe a vast ocean is hidden beneath Europa's ice."
One of my favorite parts of this book was an appendix entitled "The Solar System in a Bag." This section lists common household objects, e.g. a large yellow grapefruit- the sun, a box of salt- one small  grain is Mercury, a box of raw brown sugar- one grain is Earth, a cherry tomato (Jupiter) and three rolls of gauze (tied end to end these are the length of the tail of the Great Comet of 1843. You'd need a really big space (Eris is 10 football fields away from the Sun) but this would be so much fun to try with kids!
A great new "space read!" I could see myself sharing this with kids from ages 5 to 105!
Posted by Carol at 7:05 PM