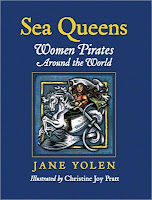 Some people might describe me as a little headstrong, but basically, I have always been a "good girl," one of those kids whose pretty much did what was expected. My worst sin, I think, was getting thrown out of second grade during a phonics lesson on short e (someone should have told me that short/long e were in no way connected to height, and that I was not supposed to tell the teacher I really didn't care to learn about short e because I already knew how to read). Nevertheless, throughout my school career, I was secretly fascinated by girls like Bernice R. who wore frosted lipstick and blue nail polish, and spent lunch recess making out with boys on the railroad tracks behind Washington Irving Junior High.
SEA QUEENS: WOMEN PIRATES AROUND THE WORLD tells the story of some "bad girls," a dozen or so pirate queens that sailed the high seas, beginning with the Greeks, and ending in the 1800's. The book begins with a short chapter on pirates (did you know that some pirates, called privateers, were actually paid by their countries to protect their ships, or raid the ships of other countries?), which is followed by a series of short-ish biographies of each of these "wild women?" The biographies are accompanied by text boxes which give additional information about the character , area, or time period. I found the text boxes as interesting as the biographies.
I also loved looking at Yolen's notes and bibliography in the back of the book. The copyrights on the texts she used for research range from 1831-1995. In her notes, she talks about how she wrote another book about pirates thirty years ago, but many of the sources she used for this book were not available then.
The illustrations in this book match the text perfectly. A beautiful navy blue cover (no book jacket) with a colored woodcut right in the center. Illustrations inside the book are simple, black and white woodcuttings, that perfectly augment the text.
A fun read for the naughty and secretly naughty!
Posted by Carol at 8:16 PM

Always have loved this one. Yolen is amazing.