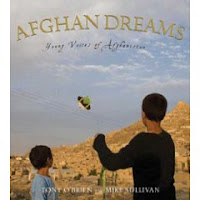 Tony O'Brien is the head of the Documentary Studies program at the College of Santa Fe. Mike Sullivan is a bush pilot and photographer who spent years working with Jacques Costeau, and has done humanitarian and environmental work all over the world. These two men travelled to Afghanistan to interview children about their families, their histories, and their hopes for the future. Each two page spread contains a beautiful full color photograph of a child, taken either at school, home, or at the rug factory, or market, or bakery, or marketplace where they work. The opposing page tells the child's story. Here is the story of Nadira, an eleven-year-old carpetmaker:
I have been working on the carpets for six years. Because of the work, I don't go to school. I would like to go; my family would like me to be in school.
There are eight in our family, and four make the rugs. I don't know how much I make in a day; the money goes to the family. I start at five in the morning and finish at seven at night.
And here is Shaheen, a ten-year-old pick pocket who was interviewed at the Kabul police station:
There are six people in my family. My father died six years ago.
I was selling plastic boxes in the bazaar. A boy named Jamadeen came and said, "Work with me and you will make 1,000 or 1,500 afghani a day." He said, "Come and watch me. I will pick a pocket and you will see how much I earn in a second." He went and robbed someone and got 700 afghani…I started being a pick pocket with my friend twenty days ago. I've done it five times." He is then asked what he thinks will happen now that he has gotten caught, and he says he will go to jail.
These children appear to have had hard, hard lives. They speak of hunger, of having to leave their homes during times of fierce fighting, of family members killed by the Taliban. At the same time, most of these children also tell stories of hope. They talk about going to school, of the importance of education, of their hopes for peace in Aghanistan.
I cannot get these children's faces and stories out of my mind. If I had money, I would buy this book for every politician in Washington…
Posted by Carol at 10:45 AM

I met Tony and Mike when they introduced this beautiful book and series of photographs at the Verve Galley in Santa Fe. I am hoping that it reaches the White House and that it becomes part of the President's reading list in 2009.