AIN'T NOTHING BUT A MAN: MY QUEST TO FIND THE REAL JOHN HENRY- Scott Reynolds Nelson with Marc Aronson 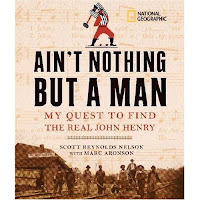 Everywhere I go, experts are telling me that I need to teach kids to think like mathematicians, or think like scientists, or think like historians. In theory, I agree with them. In reality, however, I find this more than a little difficult. You see, I am not a mathematician, or a scientist, or a historian, and I don't know how they think. And it's a teeny bit hard to teach kids to do something I don't know how to do myself.  In AIN'T NOTHING BUT A MAN: MY QUEST TO FIND THE REAL JOHN HENRY, I think I have found an answer, at least to the history dilemma.
Author Scott Reynolds Nelson is a history professor at the University of William and Mary who specializes in railroads, and more specifically, railroads and railroad workers in the South. A previous book, STEEL DRIVING MAN: JOHN HENRY: THE UNTOLD STORY OF AN AMERICAN LEGEND, written for adults, won several awards, including an award for the best history book of 2006. I can see why.
AIN'T NOTHING BUT A MAN  is like a field trip into the mind of a historian. Nelson allows us to follow him as he puts together an enormous history puzzle-- who was John Henry? Listen to him at work:
"I didn't start out looking for John Henry. In fact, that search was part of a larger mystery I was trying to solve. But that is the way I work. I am a historian, and my work is an endless scavenger hunt. No matter what the assignment I am working on, I keep picking up clues and filing them away. I don't know when I will use those bits of information, but I keep them, and sometimes they come in handy…"
"The more you know about the past, the more questions you ask. Once you have a handle on what others have found, you can see the gaps, the spaces, the places that have not been covered. That is exactly what happened to me. Even before I thought about John Henry, I discovered that some 40,000 men, the largest railroad workforce in the South, were hardly mentioned. Why? I set out to learn more about those men. That was the mystery I was trying to solve."
"Once upon a time, historians were trained to spend all of their time poring over official documents and other writing left from the past. But more recently, they have realized that the past comes down to us in many ways. Some scholars study fashions, others food. Some sit in graveyards looking at the decorations on tombstones, and more and more historians pay attention to songs" (p. 16).
Nelson is one of those historians who is interested in songs. He uses songs about John Henry, a man who drills into rock (and who I always thought was a part of American folklore, kind of like Paul Bunyan) to learn more about the 40,000 African Americans who built and maintained railroads in the deep South in the 1800's. The reader hikes with Nelson into the hills of the back country of West Virginia, and sits in dusty university libraries, and examines old photographs and prison records, as Nelson painstakingly puts the pieces of the John Henry mystery together. It's a fascinating journey and one that I think kids would absolutely love.
AINT NOTHING BUT A MAN is illustrated with old photographs, artwork, prison records, and other artifacts from Nelson's search. Each document is thoroughly labelled with a caption that is chock full of additional information. Text boxes give kids  background that enables them to more fully understand the text.
I loved this book! I can't wait to share it with kids!
Posted by Carol at 6:29 AM

This book also made the PW Best Books list for children's nonfiction. I haven't seen it yet, but your review has made me determined to get my hands on it.

This one looks good. I'll have to look for it at the library.

This looks AMAZING! Thanks for sharing!

Sounds like a good one. Thanks for a great review!

I have to check this book out. My kids LOVE Bruce Springsteen's version of the John Henry song. So do I for that matter!

I read it last weekend, and I still can't get it out my mind. It's truly amazing.

This one is going to the top of my book list. I love history and teaching. This book sounds right up my alley with lots of primary sources. Thanks!

I taught middle school history for 5 years and am taking some time off right now to take care of my two girls. I sometimes moonlight as a literacy specialist.