THE RED BANDANNA by Tom Rinaldi 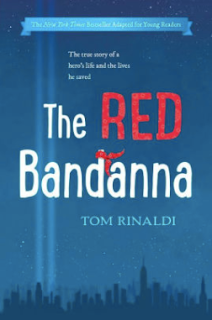 Welles Crowther was a junior associate at Sandler O'Neill, working on the 104th floor of the World Trade Center on September 11, 2001. He didn't survive. However, in the days following, his parents began to hear stories about a young man who had led many others to safety. The man was described as Anglo, slightly built, very short hair, and most importantly, wearing a red bandanna. The Crowthers knew this was their son, Welles. Since he was a very little boy, he had talked of following his two grandfathers' career path as firemen. And since he was a very little boy, he had carried a red bandanna handkerchief in his back pocket almost every day. This short novel, based on a longer adult book, tells the story of a 9-11 hero. You can also watch a video about Welles here.
Posted by Carol at 4:39 PM