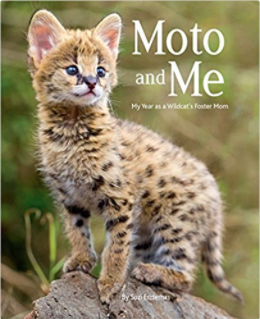 I first became familiar with Eszterhas' work when I was a CYBILS nonfiction judge a few years ago. ORANGUTAN was in my NF top 10 in 2013, it was also my CYBILS mighta-beens that year.  That year, I also loved SEA OTTERS.

MOTO AND ME made this year's CYBILS nonfiction nominees. Eszterhas has moved to the Masai Mara savanna (in Kenya) to photograph wildlife. According to Eszterhas,  huge wildfires are common during the hot dry summers. During one of these fires, Moto's mother was trying to carry her two-week-old serval kittens across a dirt road. She was startled by the noise of a vehicle and dropped him. Before she could return,  some tourists found him, and thinking they would help, picked him up, and took him to the ranger station. By the time they got there, it had been too long and his mom was gone. Park rangers knew Eszterhaus had extensive experience with cats, and asked her if she would be willing to raise him until he was old enough to be independent.

Eszterhas named the baby Moto (African for fire). At first, she bottle fed him a special mixture of cows' milk, eggs, fish oil, and vitamins; he loved this so much that he drank really fast, one time he choked, and she had to hang him upside down and pound on his back. Several times each day, she rubbed him down with a rough washcloth and brushed him with a toothbrush, because those actions were similar to those he might feel during life in the wild. He didn't like being away from her, so when he was young, she carried him around in a pouch as she took pictures and went about her daily life.

At the same time, Eszterhas was very clear that she was raising the young serval to return to the wild. She wanted him to be ready for that, so she worked hard to make sure he would have the skills he needed. Servals usually play with their littermates. Instead of a sibling, Moto played with a stuffed duck. As he got older, she blended chicken with his milk, then eventually introduced a mouse. Moto hissed at her and took her to his nest, which happened to be Esterzhas' bed.As Moto got older, she left the tent open, gradually he spent more time outside, would always come and cuddle with her before he went out at night. One night he didn't come to cuddle, and although she worried, she knew he was gone. A few days later, she saw him in the wild. He came to her jeep when she called, but also left very quickly.

This book is a little longer than other books I have read by Eszterhas, but it's just as engaging. It might take a couple of sittings, but I know younger kids would love it. I can't wait to share it with my seventh graders, because I think they will love it too!
Posted by Carol at 4:33 PM