Today, on Martin Luther King Day, it seems appropriate to review two picture book biographies. These women are well-known entertainers, but perhaps they should  more famous for their roles in the Civil Rights movement. 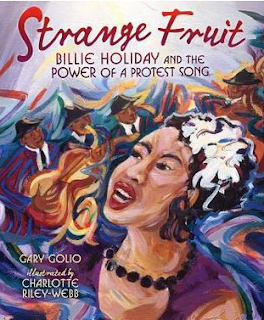 "Somebody once said
we never know what is enough
until we know what's
more than enough."

Gary Golio's picture book, STRANGE FRUIT: BILLIE HOLIDAY AND THE POWER OF A PROTEST SONG is definitely a picture book for older readers. Billie Holiday lived a sad, sad life. As a baby, she was left with an older half sister for years. At ten, she ended up in a reform school because something was done to her. When she was 14, she moved to NYC to live with her mother, and they both ended up in jail. Billie  knew she wanted to be a singer. She sang at small clubs around New York, and then was booked for larger engagements. She endured much protest, not being able to walk around in the clubs, having to use the service elevators, having to sleep on the tour bus.

Billie finally ended up at the Cafe Society, a club created especially for blacks by Barney Josephson. At the Cafe Society, Barney was contacted by Abel Meeropol, a Jewish teacher from the Bronx. Meeropol, outraged by a photo of a lynching, wrote the song "Strange Fruit. Barney Josephson thought that the song was important, and asked Billie to sing it. Here is a link to a recording of Billie Holiday singing "Strange Fruits."

End matter includes "What Happened Next" as well as a biography of Billie Holiday. Charlotte Riley-Webb's oil illustrations are colorful and strong and vibrant. 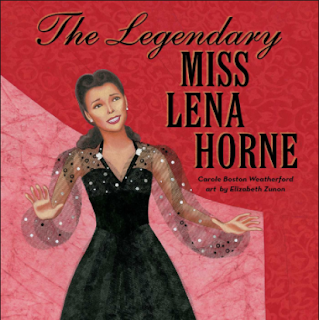 As an African American entertainer, Lena Horne was:
not allowed to eat or sleep at the places where she was the headline entertainer


During World War II, Lena paid her own way to sing for black troops. At that event, the German POW's were seated in front of the African American soldiers

MGM offered her the first ever contract as a black actress, but the NAACP wanted her to take a stand, and Lena refused to play the role of maids or mammies. Ultimately, she was cast mostly in singing roles that could be easily edited out in the South.

She appeared with Medgar Evers and sang "This Little Light of Mine." He was killed just a few days later.

At the I HAVE a Dream Speech she spoke one word into the microphone- FREEDOM!

These women's fight for freedom is definitely one our students should know about!
Posted by Carol at 7:21 AM