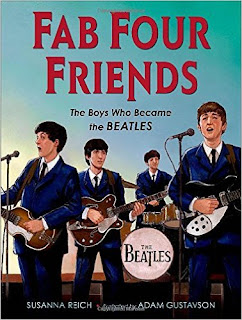 Not sure I should admit this, but I remember watching the Beatles on the Ed Sullivan show in 1964. Yep, I really do. I remember my parents, specifically my dad, fussing about their long hair. At age 5, I was a little young to be a rock music fan, but nevertheless, songs like "Love, Love Me Do" and "Yellow Submarine" were a big part of my childhood. It was fun, then to be be taken back to those days with a brand new picture book, FAB FOUR FRIENDS: THE BOYS WHO BECAME THE BEATLES, written by Susanna Reich and illustrated by Adam Gustavson.

Reich captures the early lives of the Beatles and how John, George, Paul, and Ringo came together as band. The story is told in chapter-like chunks, beginning with John, then progressing through Paul, George, and finally Ringo. I'm struck, as I read, by the difficulties each of the boys overcome. John's mother and father split up when he was very young and he was raised by an aunt and uncle, but always longed for his mum, who lived nearby and played a role in his life, but was not around on a daily basis. Paul's mother died when he was a young child. As a child, Ringo was hospitalized for appendicitis for a year at age seven, and then two more years when he was just a little older.

I was also struck, in reading this book, by how hard the Beatles actually worked to become a band. People think they were an instant sensation, but that's really not the case at all. There were hours and hours of after school practice. There were disapproving adults, like John's Aunt Mimi, who told him, "The guitar's all right for a hobby, John, but you'll never make a living at it." In their early days, the band was so poor, they tied their microphones to broomsticks, which their girlfriends held up while they played. And  they'd "split an order of toast and argue about the extra penny for jam." When they finally got a gig at the Indra Club in Hamburg, Germany, they thought they would be staying in a glamorous hotel and ended up in two dingy, smelly rooms in the back of an old movie theater. And there was the issue of finding the right permanent drummer.

This is a really long picture book, definitely not one I would read to a class much below third or fourth grade. It would be perfect however, in a unit on picture book biographies (end matter includes an author's note, a glossary, notes, and a bibliography of book and internet sources), or a unit on perseverance. It would also be terrific for a middle school music class.

You gotta love a good picture book biography and this one definitely fits into that category.

Review copy provided by publisher.
Posted by Carol at 6:53 AM