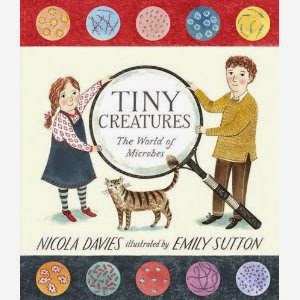 Got any young doctors or scientists hanging around at your house? If so, Nicola Davies, TINY CREATURES: THE WORLD OF MICROBES is sure to delight!

but do you know that there are creatures so tiny
that millions could fit onto this ant's antenna?

So tiny that we'd have to make the ant's antenna
as big as a whale to show them to you?


The use of scale in this book is so clever-for example, the picture of a giant ant's antenna on the first page, then on another two page spread- a single drop of water can hold twenty million microbes, that's about the same as a the number of people in New York State  has a picture of apartment buildings with people's heads, or yet another, "a teaspoon of soil can have as many as billion microbes, that's the same as the number of people in the whole of India. I'd love to have the illustration from the India page hanging in my living room!

Davies goes on to explain some of the different jobs microbes play in the universe- how they decompost soil, wear down mountains and build up cliffs turn milk into yogurt, and make people sick and well. Emily Sutton's illustrations are detailed and perfect. 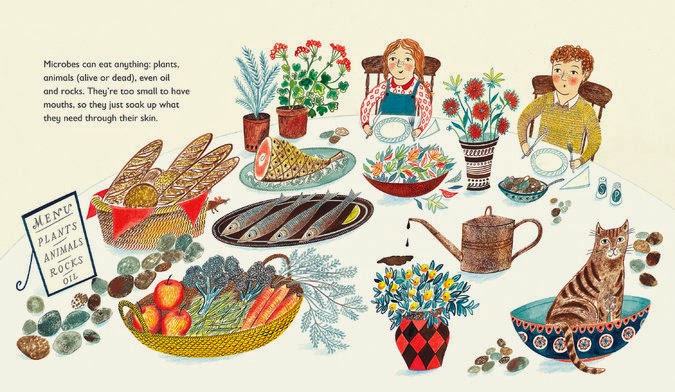 Read the NY Times review here.
Posted by Carol at 6:28 AM

I have just read back through about a months-worth of your posts and I am resisting the urge to buy 4 out of every 5 books you reviewed! I've made a list for the library, and my bank account is grateful for my good sense!

WOW! Sounds like you're getting some great picks for the CYBILS! (understatement)