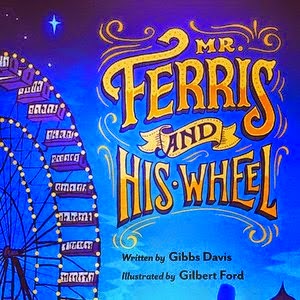 Make no little plans, they have no magic to stir men's minds.
Daniel H. Burnham,
Architect and Construction Chief of the 1893 World's Fair

"It was ten months until the next World's Fair. But everyone was still talking about the star attraction of the last World's Fair. At eighty one stories, France's Eiffel Tower was the world's tallest building. It's pointy iron and air tower soared so high that visitors to the top could see Paris in one breathtaking sweep.

Now it was America's turn to impress the world at the 1893 Chicago World's Fair. But what could outshine the French tower? And who would build it? A nationwide contest was announced… "

A mechanical engineer, George Washington Gale Ferris, Jr. and his partner, William Gronau, won the contest with their invention- a tall steel structure that moved. But then they had to build it. In the dead of winter. In Chicago. On a site that had 35 feet of quicksand. And no one wanted to finance it.

MR. FERRIS AND HIS WHEEL is a book about creativity. And perseverance. And collaboration. The book includes a kind of "double text." One text tells the story of Ferris and his invention, the other adds interesting facts about the World's Fair, the construction process, related cultural icons, etc.

From a teacher point of view, I think you could put MR. FERRIS in a study of narrative nonfiction. Or a perseverance theme study. Or do great compare/contrast thinking by pairing it with Megan McCarthy's,  POP: THE INVENTION OF BUBBLE GUM.

A book I know kids are going to love!
Posted by Carol at 4:43 AM

I ordered this book recently. Can't wait for it to come in.