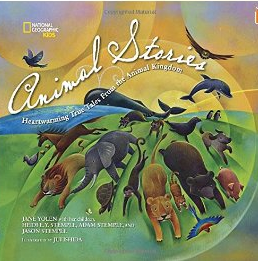 You probably know all of these animals, but what about Binta Jua, the gorilla mom who picked up a little boy who somehow fell into the cage at Brookfield Zoo and carried him to her door, so none of the other gorillas could hurt him?

Or how about Pale Male, a red-tailed hawk that makes his home on Fifth Avenue, in New York City, and has fathered a hundred or more other urban dwellers?

Or what about the Tamworth Two, two hogs that fled the slaughterhouse and escaped into the woods of England in 1998?

These are only a few of the animals that are included in ANIMAL STORIES: NINETEEN TRUE TALES FROM THE ANIMAL KINGDOM by Jane Yolen and her three children, Heidi, Jason, and Adam Stemple. Each of the 19 narrative nonfiction stories included in the book is about a different animals, and is accompanied by a short nonfiction piece about the animal or a related topic. End pages include a brief synopsis of each story, a world map, a timeline, an authors' note, and resources for further reading. Each story also contains several full color illustrations, making the book more accessible to younger readers.

A great gift for an animal lover!
Posted by Carol at 7:12 AM