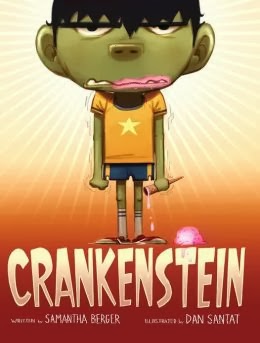 Ran to the library yesterday at halftime, just to drop off an overdue book. But while I was there, of course I had to make a quick stop at the new books shelf, just to see what might be there. And then of course, I had to stop and read a book or two. And I found CRANKENSTEIN!


"Have you seen Crankenstein?" the book begins. "Oh you would totally know if you did."

You say, 'Good morning! How are you?'
Crankenstein would say, 'MEHRRR!'

You say, 'Who wants pancakes?"
Crankenstein would say, 'MEHRRR!'

You say, 'Time for school!'
Crankenstein would say, 'MEHRRR!'

An added bonus- the illustrations are by Dan Santat!

If you wanted to use this as a mentor text-- it's a list book, written with a second person narrator (you would…), which is sometimes kind of hard to find. And the repetition is terrific!

Perfect for any Crankensteins that might live in your world! Or for days when you are feeling a little cranky yourself!
Posted by Carol at 7:14 AM

Sometimes I have a little Crankenstein who visits… Looks like a book I should get, Carol!