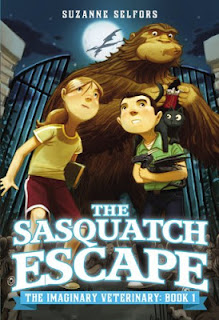 Pudding Days at the Senior Center are just not his idea of a good time, and ten-year-old Ben Silverstein is not that excited about spending the summer with his grandfather in the rundown town of Buttonville. Shortly after he arrives, he meets Pearl Petal, who claims to have seen a dragon land on the roof of the old button factory. And then Grandpa Abe's cat brings in a baby dragon. The cat has torn the baby dragon's wing, so Ben and Pearl decide to take it the only veterinarian in town, Dr. Woo, who happens to specialize in worms. At the vet, Ben neglects to close a door tightly, and a giant, hairy, horrible-smelling creature escapes from the button factory.  Ben and Pearl must capture the sasquatch before it does real damage to Buttonville.

THE SASQUATCH ESCAPE is the first book in the IMAGINARY VETERINARY series. Lots of humor, fairly large print, and Dan Santat's illustrations are going to make this one a hit with fourth grad-ish readers. Book Two, THE LONELY LAKE MONSTER, is scheduled to come out in September.
Posted by Carol at 6:22 AM

This one would pair nicely with the new graphic novel by TenNapel -- Tommysaurus Rex. In that book, the kid finds a Tyrannosaurus Rex that avoided extinction, but which could be a threat to the town if not tamed.

It does sound like the two books would pair really well. I need to hunt down Tommysaurus Rex.!