WHEN MY BABY DREAMS OF FAIRY TALES 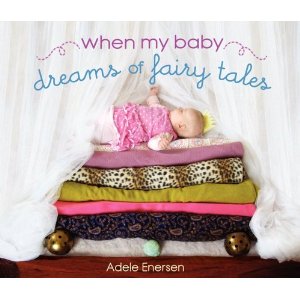 Adele Enersen is a writer/artist/PR person.  In 2010, she had her first baby, Mila. One night, when Mila was about two weeks old, Enersen and her husband were talking about all the funny positions the baby assumed in her sleep. Enersen's husband, who is a musician, stuck his conductor's wand in Mila's hand and a series of photographs that Enersen calls dreamscapes was born. Enersen started posting the pictures on a blog, which became so popular that they were eventually turned into a book. WHEN MY BABY DREAMS OF FAIRY TALES is the second book in the series.


Once upon a time there was a baby girl named Mila.
Far,  far away in dreamland, where the lakes are blue as the sky
and the white clouds look like fluffy sheep just waiting to be counted
live Mila and her fairy tale friend…

Enersen uses household objects to create fairy tale settings -- the Princess and the Pea, Rapunzel, the Frog Prince, Thumbelina, then a little Mary Poppins and the Little Prince thrown in for good measure. The pictures are not so much a story as they are just fun to look at (they kind of remind me of William Wegman's dog photographs). Most of the babies I know love looking at babies in books, and I can see WHEN MY BABY DREAMS being a baby/toddler favorite. I've bought two copies for baby showers, and am sure I will buy several more.
Posted by Carol at 8:01 PM

I enjoyed reading your article. Please make more interesting topics like this on.
I'll come back for more :)

From Japs a researcher from beddingstock