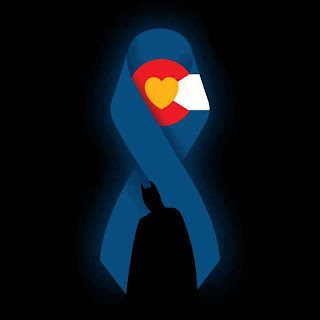 Last Friday morning, I got up early, like I usually do, to write my Poetry Friday post. I got online and discovered that the entire world, or at least the world in my town, had changed. There had been a shooting. In a movie theater. Less than ten miles from my house. Twelve people were dead. Fifty-eight others were injured.

I never wrote a post. Instead, I spent most of the day watching the news. Waiting to hear if I knew anyone. Thanking God that neither of my boys and none of my students had been there. Weeping for the people who had lost family members and friends.

And for a week now, I have been trying to make sense of a completely senseless situation. Many people are mad at the killer. I'm not. The image of his dad, dressed in a blue plaid shirt and khaki pants, carrying a small tan duffel bag, and boarding a plane to come to Colorado plays in my head, over and over and over again.

And I just feel horribly, horribly sad that our world has come to this. All week, the line, "Rage, rage, against the dying of the light," memorized many years ago, in high school or college, has played, over and over and over again in my brain. I kept thinking that it was a perfect chorus for this situation and that we as moms and teachers and ordinary people need to come together and rage against the darkness and the evil that seems to be so prevalent in our world.

I decided that I wanted to use it for Poetry Friday. I couldn't remember exactly where the line came from. When I searched online, I discovered that it was from Dylan Thomas' "Do Not Go Gentle Into That Good Night," and that he had actually written it for his father. I guess then, it doesn't really fit this situation exactly, but since that is the line that has danced in my head all week, here is the beginning of that poem.

"Do Not Go Gentle Into That Good Night"

Do not go gentle into that good night.
Old age should burn and rave at close of day.
Rage, rage against the dying of the light.

As I was looking for "Rage, rage against the dying of the light," I stumbled across "Blood" by one of my favorite poets, Naomi Shihab Nye. It's actually much more appropriate for this situation.  I include it, here, then, too.
Poetry Friday is at Life is at Life is Better With Books.
Posted by Carol at 5:24 AM

I've been off the internet for some funny reason, but back on now, so I missed today, but can read & enjoy everyone's posts. Thank you for this Carol. I visited the memorial today and stayed and stayed. Typical teacher in me looking ahead & I wonder what they'll do after a while, or what is possible? More information is being revealed about the young man, which saddens me even more. What a time. Best wishes to you.

Thank you for this thoughtful post, Carol. I'm sorry this tragedy hits so close to home for you. I was looking around and saw an interesting site called "One Year of Writing and Healing," which has a little list of "healing poems" I thought you might like to see: http://www.oneyearofwritingandhealing.com/one_year_writing_and_heal/healing-poetry.html

Indeed, "What does a true Arab [insert here: HUMAN] do now?"

I just finished listening to CLOUD ATLAS for the second time in my life (of many more to come). The ending speaks to this question. Maybe instead of just quoting it on GoodReads, I'll make it into a blog post.

Thanks so much for your kind words. This has definitely been a hard week. The service puppies at www.explore.org help. Poetry helps. And the kindness of friends definitely helps. Linda, I went to the memorial last Sunday morning on the way to church. It was early in the morning, so it was quiet. They were just setting up the crosses. Mary Lee, I have never heard of Cloud Atlas, but it sounds like one I might want to look for. And Tabatha, thanks so much for the website. Poetry really does help, and writing helps and I appreciate you leading me toward this website. Thanks much!