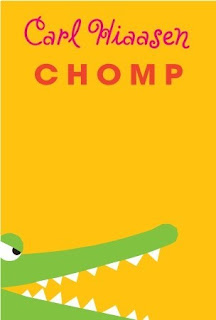 A couple of months ago, I came across CHOMP at Tattereed Cover. I loved HOOT and FLUSH, so of course I picked it up. I put it on my TBR list as soon as I read the first few paragraphs:


Mickey Cray had been out of work ever since a dead iguana feel from a palm tree and hit him on the head.

The iguana, which had died during a hard freeze, was stiff as a board and weighed seven and a half pounds. Mickey's son had measured the lifeless lizard on a fishing scale, then packed it on ice with the turtle veggies, in the cooler behind the garage.

This was after the ambulance had hauled Mickey off to the hospital, where doctors said he had a serious concussion and ordered him to take it easy.

And then I went on a kind of bibliophilic (is that a word?) overload, like I always do at Tattered Cover, and forgot all about CHOMP. A couple of weeks later, I read Bill's review at LITERATE LIVES, and requested the book from the library.

CHOMP is typical Hiaasen-- a little ecology, a little humor, and a little mystery- rolled together to make a really great story. Mickey McCray, an "animal wrangler" in the Florida Everglades, who provides animals for television shows, photo shoots, etc. His son, Wahoo, has grown up with an alligator named Alice, Beulah- a fourteen foot python, racoons, and all kinds of other wildlife in the back yard.

Mickey's accident has rendered him unable to work and the family is in dire financial straits. Wahoo's mom, a linguist, takes a job in Shanghai to support the family. Shortly after she leaves, Wahoo takes a call from a representative of Expedition Survival! a reality television show. Each week Derek Badger, a "faux survivalist" is placed in a different locale and must "fight" his way out (The show, like most reality television, is a total fake--Derek Badger actually spends his nights in a five star hotel and is brought in by private helicopter every morning). Badger's show is coming to the Everglades and wants to use the McCrays' animals and expertise. The McCrays, desperate for money, accept the job.

CHOMP was a great read. Loved Hiassen's characters- Wahoo, a typical, not totally sure of himself adolescent boy, his classmate and friend, Tuna, a girl living in a trailer in the Walmart parking lot with her abusive, alcoholic father, and Derk Badger- the fake reality naturalist. Derek Badger's encounters with the "natural world" are hilarious-- especially loved the one where he tries to ride Alice, the very real alligator, across a pond,  and another one where he decides to eat a bat, who does not want to be eaten and attaches himself to Badger's lip. And then there's Hiassen's really skillful way of weaving information about animals of the Everglades into the story.

A terrific read for upper intermediate or middle school readers! And adults!
Posted by Carol at 8:41 AM