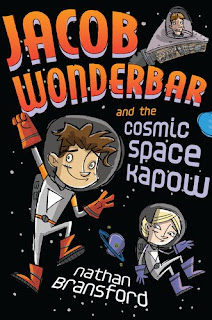 If I had to describe this book in a few words, I'd say Captain Underpants heads to outer space with sixth grade main characters. Or maybe Wimpy Kid goes sci- fi. Maybe the genre could be described as slapstick sci-fi. At any rate, this debut novel by Nathan Bransford, is really funny.
Jacob Wonderbar (substitute teacher slayer extraordinaire) and his two closest friends, Dexter and Sarah, are in the woods one day when a strange silver man approaches and offers to trade his spaceship for a corn dog. It's not long before Jacob, Dexter (who is much less adventurous), and Sarah are headed for outer space. They are having a great time until they encounter a large, unknown planet directly in their path. Left with few options, Jacob decides to blast it with a missile, and then, well, as the back cover of the book says, "Space travel is all fun and games until someone breaks the universe."
The missile blaster sets off a chain reaction that obliterates the path back to earth. Jacob, Dexter, and Sarah's efforts to get home end up taking them on a series of crazy adventures, which including an encounter with Master Cracken- the most rotten, black-hearted buccaneer this side of the Big Dipper, a trip to Numonia- a planet where the air smells like burp breath, and a trip to the Planet Archimedes to steal the world's largest diamond because it supposedly has magical wishing powers that might get the trio home. And then there's a trip to Planet Paisley- where the clothing store displays floral print dresses, pointy glasses, and beige clogs, which we soon come to find out are purchased by its inhabitants, substitute teachers who sit around drinking coffee and doing crossword puzzles (ok, what is up with that one!?!?!)
There's a lot to like about this book. It's funny and fast-paced. Jacob is African American. His friend Sarah is a a strong female character, more than capable of holding her own with the fellas. There's a small strand of serious-- the friendship among the three kids, and also Jacob's relationship with his dad, who in not in the picture. According to the blurb in the front of the book- this is the first in a series. Can't wait to see number two!
Posted by Carol at 9:08 PM

Have you checked out Nathan's blog? It is an exceptional resource for writers. :)

Just went to check the link to share: http://blog.nathanbransford.com/ & there's a little conversation happening about writing a book review of JACOB WONDERBAR & THE COSMIC SPACE KAPOW + getting prizes. You'll have to check it out. :)