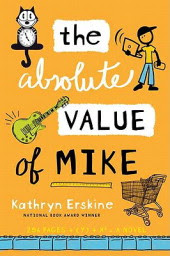 Mike is a fourteen year old boy, being raised by (or maybe raising?) his absent-minded, math professor father. When the professor is invited to teach in Romania for a summer, he sends Mike to live with a great aunt and uncle, who he has never met. His father believes that his math-hating son will be helping to build an artesian screw, which will help Mike, who has math learning disabilities, to get into a math magnet high school.
When Mike arrives in the town of DoOver, he finds a very different situation. His great uncle, Poppy, is completely overcome by grief over the death of an adult son, and sits in a chair all the time. His great aunt Moo has macular degeneration, but still drives (scarily). These two, along with Gladys, a heavily pierced and tattooed bank worker, and Past, a homeless man who has his "office" in the park, have teamed up to raise $40,000 to bring a little boy, Misha, from Romania to be adopted by Karen, the town minister. When Karen's father has a stroke, she is called away and Mike is put in charge of the town's fund raising efforts.
This book is funny, but also more than a little sad. Mike wants to be one thing, his dad hopes he will turn out to be very different. In Do Over, Mike discovers that it is ok to be who you are…
Read Mary Lee's review at Year of Reading.
Posted by Carol at 5:09 PM