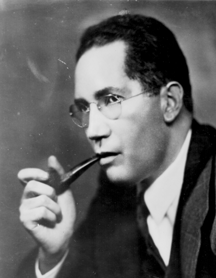 A couple of months ago, Son #1 had to do a project on an artist from the Harlem Renaissance. I thought I knew quite a few poets, but when he got the name out of his backpack, it was Sterling Brown, a poet who was new to me. As we got further into the project (and yes, this project was a "we" project-- and please don't send me any notes about parents who do projects for/with their kids because I am a teacher and I already know all of that stuff, but there is just something about slapping two pictures on a piece of posterboard that brings fuzz to my teeth!), I wondered why I had never heard of Sterling Brown. He was one of the first poets to publish in the black "vernacular." He was a professor at Howard University for 40 years. When he retired, some people wanted to rename the university after him. He is considered one of the founders of African American studies programs at the university level. He wrote books and essays and literary criticism.

At one point in "our" research, I said, "Holy cow, Zay you got a rock star."
"You mean like Lil' Wayne?" he replied.
Reading about Sterling Brown, I wonder why I was never asked to read his work in high school or college. He really was a rock star in the literary world. His poetry is mean and gritty and true to life.
Maybe some of you are like I was, and had never heard of Sterling A. Brown either. But we should have. We certainly should have.

They dragged you from the homeland, They chained you in coffles,
They huddled you spoon-fashion in filthy hatches,
They sold you to give a few gentlemen ease.

They broke you in like oxen, They scourged you, They branded you,
They made your women breeders, They swelled your numbers with bastards..
They taught you the religion they disgraced.
You sang:
Keep a-inchin' along
Lak a po' inch worm…
You sang:
By and Bye
I'm gonna lay down this heaby load…
You sang:
Walk togedder, chillen,
Dontcha git weary…
The strong men keep a-comin' on
The strong men get stronger.

Poetry Friday is at Live! Love! Explore! Thanks for hosting Irene!

And I say, HOORAY for parents who make school projects a family learning experience!

HOORAY that Son #1 got to find out that his poet was a Rock Star, got to make a connection to his own rock stars, and got to do more than copy-paste from wikipedia onto posterboard!!

You light all our paths...

Poetry is so good for the soul... oxygen for the spirit...

Hugs to your incredible boys xoxoxo

I'd never heard of him either--thanks for sharing!

You are so right, we should have. Thanks for bringing him to my attention.