NEW YEAR'S RESOLUTION (OR NOT) 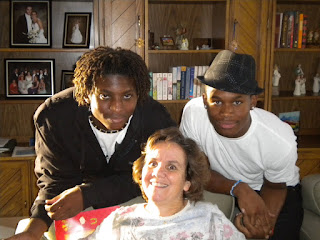 I'm not much of a New Year's resolution kind of gal, mostly because I don't see much point, because I never keep them. For the last four years, for example, I have resolved to lose 20 pounds. And walk more. And take my two badly behaved labs to doggie boot camp. The trouble is, I usually don't last too long with resolutions. This morning I was eating Frito Lay scoops at 10:14 am. And it never got above 20 so I didn't go for a walk. And one of my dogs, who shall remain nameless, tore up a Christmas wreath my sister made for me 20 years ago, when I went to answer the phone.
I have, however, tried several different variations on the New Year's Resolution theme. One of my good friends says that rather than making resolutions, people should make a list of really concrete things that they want to do that year, e.g. Go see the King Tut Exhibit at the Museum before it leaves on January 9th. And that you should have as many things on the list as you are years old. I have actually tried this a couple of times. And I like it. Or I like it until I lose the list, which usually happens about January 10th.
Another group I follow take the "one word" approach to resolutions. With that approach, you choose one word, and focus on that word all year. Some people even make scrapbooks or do special projects related to their word. I actually tried the one word thing last year. I chose the word order. Looking around my house, my car, my desk at work, though, it kind of looks like I chose disorder. So I am not sure that quite worked for me either.
All this to say, the resolution thing just doesn't work for me. Or the yearly bucket list. Or the one word thing. But I do feel just a teeny bit of guilt that I don't do any of that stuff very well. So I try to do my own thing. It's called the "Learn One New Thing" list. This year, I'm going to learn to use the camera that I bought myself for Mother's Day. To that end, I'm setting up my own personal 365 photos blog. Feel free to drop by any time…
Posted by Carol at 9:46 PM

I love the photo. I love reading your thoughts & I can't wait to see your new blog, except the link isn't working.

First of all, LOVE the picture and can't wait to see more on your 365 blog. I never keep my resolutions either. I have been trying to lose the same weight for ever and trying to declutter forever. Oh, well. Happy 2011!

Whoops! Not sure what was wrong with the link, but I think I fixed it. It's the same picture as this one today, but after this it will be different.

What happened to the little second grader I met. Oh, that was years ago. Happy New Year!

Great photo, I was inspired and I joined the 365 project as well.

What a FINE looking family! And in the end, who cares about the resolutions and bucket lists anyway? I say live your life day by day and love every moment.