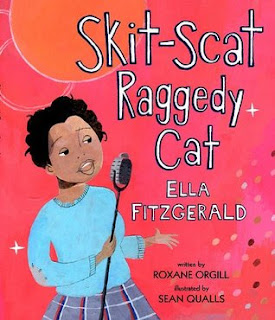 Ella Fitzgerald did not have an easy childhood.
She lived with her mother, Tempie, and stepfather, Joe, until she was fourteen, then Tempie died suddenly, and Ella was sent to live with her Aunt Virgina, who "offered meals and a roof, and nothing more."

Ella started skipping school and getting into trouble, and was sent upstate to a reform school where they "it was a regular routine to leave a girl in the basement, in chains, with nothing but bread and water." After two years, she ran away from the school, and ended up back in Harlem, where "people took her in and gave her a meal and a bed, or didn't…At the Baptist church, Ella got a pair of men's boots to keep the cold off her dancing feet."

But Ella persevered. She won a spot at Amateur Night at the Apollo Theater. Heer voice cracked during her first few notes, and a kind emcee stepped to the microphone and said, "This young lady's got a gift she'd like to share with us tonight. She's just having a little trouble getting it out of the wrapper. Let's give her a second chance." Ella won first prize at that contest, but did not win the usual week with the band because of her raggedy appearance. Later, Ella won another amateur night at the Harlem Opera House. Soon, she found herself being introduced to Chick Webb. One of Webb's trombone players gave her a bar of soap, and told her to wash herself good. The costume mistress took a comb to her tangled hair every night. Soon, Webb and Fitzgerald's song, "A-Tisket, A-Tasket," was a number one hit on the radio. And after that, it was "so long, Skit-Skat Raggedy Cat. It's Rowdy-Dowdy High Hat Baby now."

This picture book biography, with its colorful, predominantly red and blue illustrations by Sean Qualls, has much to say about persevering and overcoming odds. The text is a little long, so it's probably a better read for intermediate grades, or middle or high school. And it would probably be even more meaningful if kids could see this link to Ella Fitzgerald singing A-Tisket, A-Tasket, or check out Fitzgerald's official website here.
Posted by Carol at 7:58 AM

This seems to be a very interesting book. #Amustread ~JB