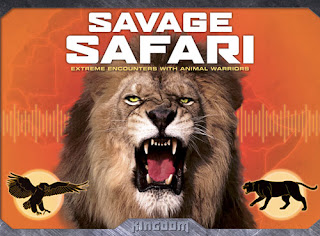 SAVAGE SAFARI is a visual smorgasboard that I think kids are going to love. Each two page spread features a different African animal. There's a large photograph, labelled with the animal's salient features and a paragraph of information. Then there's a silhouette drawing with length, height and weight. And a scale that rates the animal on characteristics such as intelligence, speed, agility, and evasion techniques. A small map shows where in Africa the animal lives. There's a "card" that features the animal's allies and enemies. Another area on the page features the animal's superpowers (a hippo, for example, can bite with one ton of pressure), its equipment (the hippo not only has large size, but also has aqua-adapted skin, ears, and feet), its weaknesses (that same hippo has thin skin that dries out, so it has to stay close to water), and an interesting fact (the hippo can stay underwater for up to five minutes). As an added feature, two pages in the back combine the features of various animals to create the "Ultimate Predator" and "Ultimate Defender." And there's an extensive glossary. Hand this gem to one of your video game loving, book hating kiddos- it's a sure winner!

A story from today: I threw SAVAGE SAFARI into my teacher bag this morning. The fourth grade is doing a unit on nonfiction, and I wanted to share this book, with all of its interesting text features, with them. I also thought of a couple of kids that are having trouble engaging during independent reading time and thought this book would hold their interest for a little while.

I shared the book during the mini-lesson, then watched as it made the rounds during class. At the end of our literacy block, one of our ELL students approached me. This little guy is one of the kids that keeps me awake at night. His English isn't progressing as quickly as I would like it to, he isn't particularly engaged with school, and seems to be out sick pretty regularly.

"Where did you get that book?" he asked. I showed him the library sticker on the front of the book and told him that I had gotten it at the library in my neighborhood (which is not very far from the school). Thirty seconds later he was back. "Can you write down where that is?" he asked. By this time, we were standing in the hall as the kids headed off to specials.

Soon, he was back again. This time he held a slightly rumpled piece of notebook paper and a stubby pencil. "Can you write it down now?" with more than a little urgency in his voice.

And that is why I became a teacher…
Posted by Carol at 4:59 AM