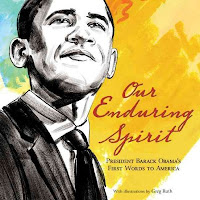 OUR ENDURING SPIRIT is excerpted from Barack Obama's inaugural address. Greg Roth's detailed pen and ink illustrations, highlighted with swatches of blue and orange and yellow and green, give kids the illustrations they need to make Obama's text, Drawings of an early railroad train cross, immigrants traveling to the United States, of slaves working the fields, armies in four different wars, an African American man eating at a lunch counter, and the Washington Monument provide kids with images to store in their mental timeline of American history.

Aside from the beautiful images, I am fascinated by this book on several different levels. As I said earlier, I love, love, love the strength of Obama's words. I can imagine myself reading this book again and again to our fourth and fifth graders, letting the words sink deep into their hearts, typing up the text so that they could read it for themselves, maybe even memorize it, so that they could recite it to their children and grandchildren.

I'm also fascinated by the font choices in this book. On each page, interspersed throughout the text, a few words or phrases are set apart in a large, colored, cursive font.
On this day
we gather because we have chosen hope over fear
unity of purpose over confict and discord.
The time has come
to reaffirm our enduring spirit…

Our journey has never been one of shortcuts or settling for less.
It has not been the path for the fainthearted--
for those who prefer leisure over work,
or seek only the pleasures of riches and fame.

Rather, it has been the risk takers,
the doers,
the makers of things--
some celebrated, but more often men and women obscure in their labor--
who have carried us up the long rugged path towards prosperity and freedom.

It doesn't really matter, but I wonder about those word choices. Who chose which words would be highlighted? Were they Obama's choices, so that he would know which words to emphasize? Or did Roth choose them as he illustrated? Was it a book designer? I'd love talking to kids about this, and about how they might use it as a tool for understanding or performing texts.

I also loved reading the illustrator's notes in the back of this book. Roth talks about a time in his life when his art, as much as he loved it, had become work, and how he sought to turn it into play again. It was during this time that Obama was elected. The day after the election, Roth went to his studio and turned out a series of pen and ink drawings of Obama, which then became the seed for this book. Roth also says several other things I want to remember and think more about, e.g., "Art is mostly about listening, really. The best art comes not when you're yelling outward with your medium but when you're quiet and listening to its source."

A great new picture book for intermediate grades, as well as middle and high school English, history, or art teachers, and also speech or debate coaches.