THE ANNE FRANK CASE: THE STORY OF SAM WIESENTHAL 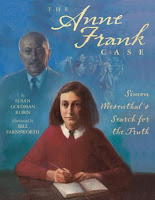 I have always thought that I would love to teach high school history. If I did, picture books and historical fiction would be an important part of the curriculum. This year, I've read lots of books I'd have to include in my curriculum. I'd have to read Laurie Halse Anderson's amazing new novel, CHAINS, when we studied the Revolutionary War. I'd use LINCOLN THROUGH THE LENS when we studied the Civil War. For the Civil Rights movement, I'd bring in NEW BOY and WE ARE THE SHIP. This weekend, I read a picture book I'd have to use when we talked about the Holocaust.

THE ANNE FRANK CASE: THE STORY OF SAM WIESENTHAL is the story of a Jewish Holocaust survivor. At the opening of the book, a group of Austrian neo-nazi teenagers disrupt a theater performance of Anne Frank’s Diary of a Young Girl, claiming that the Holocaust never occurred. Wiesenthal decides he must find the Gestapo officer who arrested Anne Frank. The book then flashes back to trace Wiesenthal's experiences during the war, which included time in the Concentration camps, loss of multiple family members, separation from his wife, and two very near-death experiences. His own experiences make him a patient but tenacious detective in solving this mystery.

This book would be great in a text set with ANNE FRANK (of course), NUMBER THE STARS, THE BOY IN THE STRIPED PAJAMAS, and for struggling readers, SNOW TREASURE.
Posted by Carol at 7:11 PM

This book looks very good. I want to add it to my set. Yellow Star by Jennifer Roy is a powerful Holocaust story about one of the few children that survived the Lodz ghetto. I do it as a read aloud and every student is on the edge of their seat waiting to see what happens next.