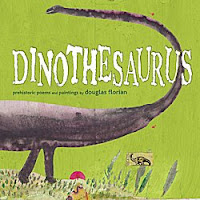 I'm a long time Douglas Florian fan. Last fall, I reviewed AUTUMNBLINGS. I also love lots of his other books, e.g. LAUGHETERIA and BOW WOW MEOW MEOW. A couple of weeks ago, I entered a contest on Kelly Polark's blog (check out the fun end of winter poem she posted for Poetry Friday today) to win Florian's newest book, DINOTHESAURUS: PREHISTORIC POEMS AND PAINTINGS. And miracle of miracles, I won! The book came today and it's terrific- one of Florian's best, I think!

DINOTHESAURUS is twenty poems about dinosaurs. The first and last poems are about dinosaurs in general, each of the other eighteen is about a different kind of dinosaur. The poems are Florian clever- lots and lots of his usual clever word play, e.g. "Seisomaurus: tremendous in size; Seisomaurus: stupendous lengthwise" or the end lines from the poem about T Rex, "I find it terrific that it's T-rex-tinct." And then there's the poem about stegoceras, "Thick head. Brick head. Hard head too." Or micropachycephalosaurus, that 20-inch dinosaur with the extra-long name. And I can't leave out "The pterrifying pterosaurs" that "flew ptours the ptime of dinosaurs." Every single poem in this book is terrific- perfectly written, so they are fun to read, even for the kids who struggle, but also chockful of interesting facts and wonderful words that hand around and velcro into kids' mouths and brains and hearts.

Florian's illustrations are as quirky and fun as the poems. They're done in collage, with all different kinds of materials, and words, and surprises. The brachiosaurus, for example, is longer than a tennis court, bigger than a barge, and looks much like a crane. Guess what three objects are hidden in the illustration. Fun, fun, fun!

A "Glossarysaurus" gives readers facts about each of the dinosaur museums and fossil sites. A bibliography gives ideas for further research about dinosaurs.

I can't wait to share this with kids on Monday!
Posted by Carol at 6:49 PM

Now you can't say you never win anything! And what a thing to win. GREAT book, eh?

Isn't the book great?! I bought one for my son, too!