THE SEARCH FOR OLINGUITO- Sandra Markle 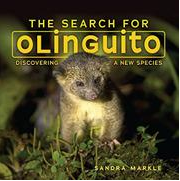 Maybe I'm a teeny bit nosy, but I love learning about how other people do their work. When I go to a play, I wonder what the actors do all day, and what they eat, and where they stay while their play is in Denver. I love (or used to love before they got so stinky) seeing pictures of the Broncos getting on their plane, or pictures of their post game food choices.

And I loved Sandra Markle's new book, THE SEARCH FOR OLINGUITO.  In 2013, Markle read an article about the discovery of a new mammal, the olinguito, a raccoon-like species that lives in the cloud forests of Ecuador and Colombia. Markle tracked down Kristofer Helgen, a scientist at the Smithsonian,  and Roland Kayes, head of the Biodiversity Research Lab at the North Carolina Museum of Natural Sciences, and pieced together the steps in their discovery.

The journey started when Helgen was studying pelts of the olingo, a similar species,  at the Smithsonian and noticed significant differences in color, fur texture, shape of ears, and tail length, on some of the species. He then examined pelts at other museums around the world and found those same features. After DNA research, he concluded that he had found a new species, which he named the olinguito. Helgen also learned about Ringerl, an olingo, who had been at zoos in  Louisville and several other places in the late 1960's. Ringerl refused to mate or interact with the other olingos, and Helgen hypothesized that she had also been an olinguito. DNA tests confirmed his hypothesis.

Helgen then needed to prove that olinguitos still exist. A Smithsonian intern from Ecuador scouted possible cloud forests, then Helgen and Roland Kayes, traveled to the Otonga Cloud Forest, close to Quito. They spent three weeks studying and photographing the olinguito. Even after that, their work was rejected by scholarly journals, because they didn't have enough information about the animal's physical features and habits. Helgen and Kayes had to spend an additional six years, from 2005-2011, studying the species before their work was accepted.

Markle follows the scientists' journey with an an engaging story and full color photographs. It also shows readers how much patience and perseverance scientists have to have. A great book for a study of perseverance.  And the book reads like fiction, so it would be terrific in a study of narrative nonfiction.
Posted by Carol at 7:17 AM