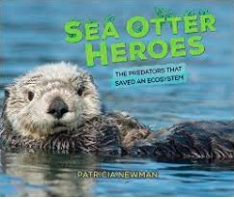 Yesterday, when I shared THE SEARCH FOR OLINGUITO by Sandra Markle,  I talked about how much I love reading books that take me in to the stories of people's work. Last night, SEA OTTER HEROES: THE PREDATORS THAT SAVED AN ECOSYSTEM by Patricia Newman was at the top of my ginormous CYBILS nonfiction pile. It's a similar book.

SEA OTTER HEROES follows the work of marine biologist, Brett Hughes. As a graduate student, Hughes studied the area called Elkhorn Slough in Northern California. Elkhorn Slough is located in the Salinas Valley, an area also known as America's Salad Bowl, because crops of strawberries, artichokes, brussels sprouts, lettuce, celery, tomatoes, spinach, and broccoli feed much of the United States. Farmers spray their crops with chemical fertilizers, then the run off drains into the waterways, which typically disrupts marine ecosystems. In areas such as Elkhorn Slough, one of the primary organisms affected is seagrass. The excessive nutrients from the fertilizers cause excessive algae growth on the seagrass, which means the seagrass can't get enough nutrients from photosynthesis. It dies, and then other living creatures in the food chain are also impacted.

Brent Hughes was surprised to discover that this was not true in Elkhorn Slough. The population of seagrass was alive and healthy. Hughes was determined to find out why. One of his first hypothesis had to do with El Niño. Examination of data from the past twenty years proved that to be unfounded. He began seeking data from other sources and discovered a tour boat Captain, Yohn Gideon, who had collected research on animal sighting on each of his journeys for almost twenty years. In looking at his data, Hughes discovered a strong correlation between the sea grass and sea otter populations. Because Captain Gideon's research was not considered to be scientific enough, Hughes had to go still further.

He talked to other scientists who had studied sea otters. He built mesocosms, a common lab technique, where a scientist actually builds an ecosystem in a bucket, barrel, or tank. And then he ventured into the slough, logging about one hundred hours over thirty days in a wet suit in the slough. Hughes hard work paid off.  He discovered that sea otters eat sea crabs, who in turn eat sea hares, that eat sea algae that kills the sea grass. Without the sea otters, the sea crabs overeat the sea hares, which then allows the algae population to go out of control.

I loved reading about this scientific mystery. I loved the full color photographs. I loved the pages of information about "Otterisms" and other related topics. I loved seeing the amount of perseverance it took for Hughes to solve his problem. I loved the end matter with suggestions of ways kids can help! Another terrific read!
Posted by Carol at 8:44 AM

Sea otters are one of my favorite creatures. It's fun to follow your nonfiction journey for the CYBILS.