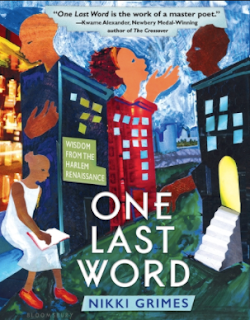 Winner, winner, chicken dinner! Yep, that's what I was about a month ago! OK, maybe I should back up a little. For the past few months, I think since November's election, Donalyn Miller has been giving away a book every day on her Facebook page. She posts the book early in the day, people comment, and then at the end of the day, she chooses a winner from the commenters. She posts some terrific books (yesterday was Jason Reynold's new book, PATINA) and pretty much every day, I comment. Three or four weeks ago, I won Nikki Grimes fabulous new poetry book, ONE LAST WORD.


The idea of the Golden Shovel poem is to take a short poem in its entirety, or a line from that poem (called a striking line) and create a new poem, using the words from the original, Say you decide to use a single line, you would arrange that line, word by word, in the right margin:

in
the
right
margin

Then you would write a new poem, each line ending in one of these words…

I wake and shake off the morning as Mom tiptoes in
"Rise and shine," she whispers, always the
same old song, "Get up. Right
now!" I grown on cue, but she gives me no margin.


Here's one of the poems from the book.

"The Negro Speaks of Rivers"
by Langston Hughes

I've known rivers
I've known rivers
ancient as the world and older than the
flow of human blood in human veins
My soul has grown deep like the rivers.
I bathed in the Euphrates when dawns were young
I built my hut near the Congo and it lulled me to sleep.
I looked upon the Nile and raised the pyramids above it.
I heard the singing of the Mississippi when Abe Lincoln
went down to New Orleans, and I've seen it's muddy
bosom turn all golden in the sunset.

As far back as I can remember, my
mother has called me "an old soul."
I never understood. But now that our family has
dwindled to just Mom and us kids, I've grown
into a man. You do what you have to do.  "David, dig deep,"
is the whisper in my ear. So I stand strong like
a tree my baby brothers can lean on. I try to be the
raft that helps carry them over this life's rough rivers.

An added bonus, the poems are illustrated by some of my all time favorites- Jan Spivey Gilcrest, E.B. Lewis, Christopher Myers, Brian Pinkney and James Ransome, to name a few. Spectacular!

This is a book you don't want to miss!

Poetry Friday today is hosted by Kathryn Apel.
Posted by Carol at 5:30 AM

It is a beautiful book to read and to learn from, too, of the craft and the history. Glad you won one of Donalyn's books. It is wonderful she is sharing so many!

I first learnt about the Golden Shovel poem through PoetryFriday - and tried my first earlier this year. It's based on an historical event, and I wanted to quote from a diary of the event... and keep it in the actual order of events... and work it into the golden shovel, which was a line taken FROM the diary (not a poem, as such) ... and it was a CHALLENGE! But I felt soooo good when I did it! :) #thatisall

Congrats on your win, Carol--and yes, what a book, and yes, Nikki achieved greatness here!

Agree! This is a GREAT book!

I love this book and have really enjoyed playing with this form. It's sort of addicting. I predict awards for this one. We will find out come January.

I love everything written by Nikki Grimes, but this is one I have yet to read. The "Golden Shovel" has eluded me..maybe I need to read this and try my own.

Woo hoo! What a fabulous book to win. Thank you for sharing it. I definitely want to read it, and try my hand at writing a golden shovel poem.