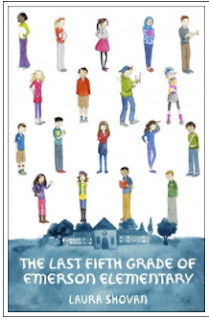 One fifth grade class
a dilapidated old elementary school
slated to be torn down
and replaced by a grocery store
at the end of the school year.
A teacher/activist that requires her students
to journal every day.
18 students including:
George Washington Furst, the class president who really wants his mom and dad to reconcile.
Gaby Vargas, an English Language Learner.
Sloane and Sydney Costley, identical twins, BFF's, but very different.
Mark Fernandez whose father has recently died.
Newt Mathews, frog loving scientist, who happens to have Aspergers.
Hannah Wiles, missing her deployed mom.
and Norah Hassan, originally from Jerusalem,
who really don't want their school to close.

This novel-in-verse follows the 18 fifth graders,
each with their own unique voice,
as they progress through a school year.

I love the way the book is designed, with each student having their own icon that appears in the corner of the page.

Looking forward to sharing this with our fifth graders on Monday!
Posted by Carol at 10:23 PM