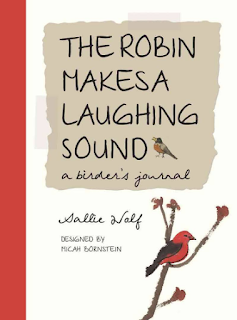 I am a wannabe artist. That is to say, I think a lot about doing art, but rarely get around to doing much. Every once in a while, I stumble across a book that makes me think a little harder. That's what happened last week. I had gone to an independent children's bookstore in my area to pick up a professional book. Of course I wandered back to the poetry section to see what might be new and interesting. I came across Sallie Wolf's THE ROBIN MAKES A LAUGHING SOUND: A BIRDER'S JOURNAL. I thought it was a new book, then discovered after I brought it home that it was actually published in 2010. So I guess it's an old, but new to me book.

In an author's note at the beginning of the book, Wolf says that she started watching birds in seventh grade, when a seventh grade teacher introduced them to Roger Tory Peterson's A Field Guide to the Birds of Eastern and Central North America. Her class actually set up a bird watching/banding station on the roof of her school, and she has been watching and journaling about birds ever since. About that same time, Wolf also began keeping journals; and her journalling process is described in another author's note in the back of the book.

THE ROBIN MAKES A LAUGHING SOUND is organized by seasons. Each season begins with a handwritten list of birds Wolf has seen, as well as several water color sketches. 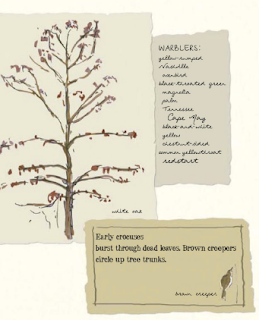 The list pages are followed by journal entries or lists that are growing into poems, and finally, finished poems. Some are haiku, others are free verse, a few rhyme.

"The Robin Makes a Laughing Sound"

I love the idea of keeping a journal that includes words, and pictures, and water color sketches. I wonder what my middle school kids, or the art teacher might do with it. Maybe someday I will even try it myself.

Mary Lee is hosting Poetry Friday at Year of Reading today.
Posted by Carol at 7:51 AM

I need to go back and take another look at this book. I, too, have great aspirations for sketching in my writer's notebook, but that always gives way to what I'm most comfortable with -- words.

What a beautiful book. I love it when we find something that taps all of our artistic sensibilities. So inspiring. I hope you take up your ideas of journalling.

Sounds like an amazing book! How inspiring that the book came from something her middle school teacher introduced. Beautiful poem sample. I am going to look for this one at my library.

What a beautiful book. New to me too. Thanks for sharing! Your post resonates with me because I too aspire to sketch more in my writer's notebook. I think sketching and writing are kin. Are you familiar with Clare Walker Leslie & Charles E Roth's Keeping a Nature Journal? I think you'd like it.

This book sounds like a treat, as well as a lesson in process. I'm eager to find a copy!

I have this book, a beautiful and inspiring one as you wrote, Carol. I did use it that last year in the classroom, & it was lovely to have for the students.

Putting this book on a wishlist for my middle school library. thanks!

Thanks for the introduction to this book, Carol. I'll be keeping my eye out for it. =)

Love that poem, and love that the teacher who had her class set up a birding station changed her life forever! Such a great idea to help connect kids with the world around them.