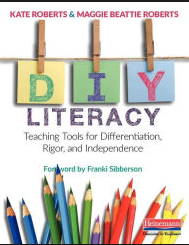 I'm super late getting started on my DIY LITERACY posts. I bought the book about three weeks ago, fully intending to start reading right away, which I actually did. But then my granddaughter came to town. Esveidy lives in Phoenix, and her mom graciously said that she could come stay with us for a few weeks. She and I had a blast playing in the children's area at the Botanic Gardens and visiting the zoo and the Children's Museum and the Butterfly Pavilion. But I didn't get much done when she was awake. She's an early riser, just like her grandmother, so our days started around 5:30; that also cut into my writing time. 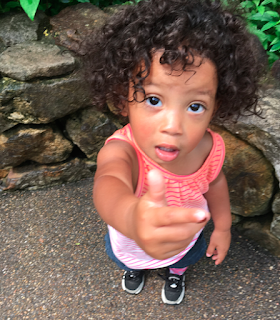 And then I had technology issues. About a month ago, I attended a workshop put on by our district IT department. One of the sessions I attended had to do with thirty tools that you could implement quickly and easily in your classroom. I love these kind of sessions, but the trouble is, I rarely implement what I learn afterwards. I decided this time that I was absolutely going to use a few of these tools this summer. When people's posts started cropping up last week, it seemed like there were a lot of mind maps. I decided that I would use one of the tools we had learned to create my response to my first chapter. I selected a mind mapping tool called Coggle. I watched the tutorial, logged on, and jumped right in.

And ummm, should I say it didn't go quite as smoothly as I had hoped? That would be putting it mildly. Typically, when I write a blog post about a professional book, I annotate in the book, and then go back and shape the information into a post. That's what I tried to do with Coggle. I struggled however with the actual tool. Supposedly, it's really simple to add branches, just by clicking on a plus sign. And then you can grab on to the branches and move the branch to where you wanted it to be.
I found both of these things relatively easy to do.

There was lots, however, that I did not find nearly as easy. There was a circular toolbar thing that would come up around a branch. You could use it to remove branches or change the color. Sometimes I could get that toolbar to come up. Sometimes I couldn't. And I never knew what I did differently when it came up than when it didn't, despite the fact that I watched the original tutorial at least three times, and then several other tutorials I found online. Same with deleting branches. Supposedly, you could simply rotate the plus sign that added branches until it became an X, and then you could click on it to delete. Sometimes I could get the X to rotate, and sometimes not. Once, I deleted a whole chunk of quotes I wanted from chapter 1.

Struggling with Coggle did make me apply what I was learning in DIY. What if I had had some kind of bookmark, or one page tool to help me understand the features of Coggle. I watched the tutorial again and again, but I couldn't seem to hold onto the information.

Next, I thought about the kids I teach. How often do I ask them to use a tool, sometimes technology, or sometimes just an unfamiliar writing structure, without adequate pre-teaching? Today I was trying to process the information in DIY Literacy, but I was also trying to learn to use Coggle. It was really hard to juggle the two, and I think Coggle got the upper hand. I wonder whether my thinking about the chapters would have been deeper if I had just used one of my typical tools...

Second, I thought about how the tool has to match the learner.  I'm not a linear thinker, at all, in fact, I'm pretty random. I'm not sure then, that, a mapping tool like Coggle will work for me. I have a more linear structure that works for me. I wonder, though, how often I try to force kids to use my thinking or organizational processes.

Finally I thought about authenticity. That was the word that pounded in my brain as I was reading. I am a reader. I am a writer. I can talk to kids easily about my own reading and writing processes. At the same time, I know lots of teachers, including some that I coach, who are NOT readers or writers. What about them? How can they talk to kids about their reading and writing strategies? 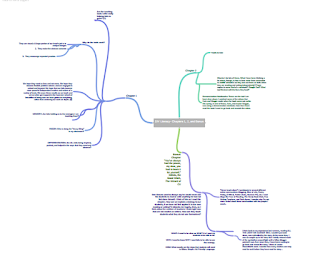 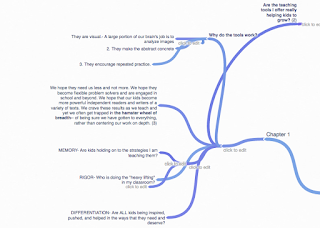 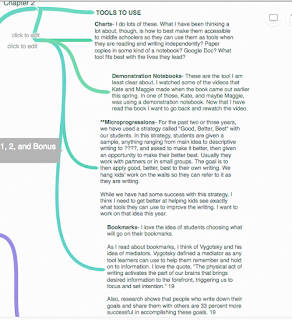