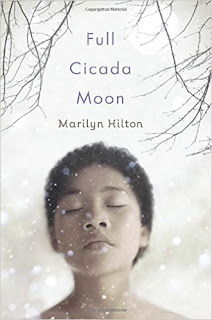 FULL CICADA MOON fits all three of those qualities. The novel in verse begins in January, 1969. The Vietnam War is drawing to a close. Space exploration is moving full speed ahead, with the Neil Armstrong's walk on the moon looming on the horizon. Twelve-year-old Mimi and her mother are on a bus, traveling from California to join Mimi's father, who has taken a job as a professor at a college in Vermont.

This might be like any coming of age novel except for one thing. Mimi's mother is Japanese and her father is black. Many people in Vermont are not especially welcoming of Mimi or of her family. Her next door neighbor refuses to talk to Mimi and her family, or lend them a snow blower. The kids at school engage in small, daily acts of unkindness. A classmate steals a critical piece of her Science Fair project. A store clerk accuses her of shoplifting.

Mimi is even more of an outcast because she pushes against the gender stereotypes of that era. She already knows how to cook and sew and would much rather take shop class than home economics, but the middle school principal won't allow that. She loves science and dreams of being an astronaut, but that's not a career that is considered acceptable for young women.

A terrific story with a strong young woman and a couple of very special friends. I checked this out of the library, but I'm going to have to buy it, because I know it's a book my middle school friends are going to love.
Posted by Carol at 8:44 AM

Great book.
Carol, Where can we leave our links for the Poetry Friday Roundup? At midnight, I'll have an original poem about doves, and a poetry prompt up at www.poetryforkidsjoy.blogspot.com.