HE HAS SHOT THE PRESIDENT-Don Brown 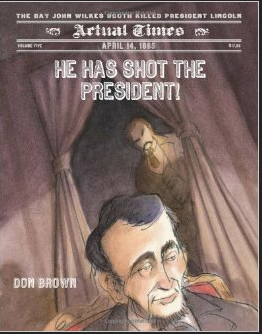 If more teachers included the story part of history, I'm pretty sure a lot more kids would be interested in history. That's definitely true with tonight's CYBILS read, HE HAS SHOT THE PRESIDENT by Don Brown. Brown tells the story not only of the day President Lincoln was shot and the subsequent manhunt for John Wilkes Booth. It's the richness of the story that captures the reader's attention.

I know kids all the way through high school are going to love the story of how Lincoln's death was one of three planned assassinations for that evening. They are going to be fascinated by how four soldiers carried Lincoln's long and almost lifeless body across the street to Peterson's Rooming House, then laid it diagonally across a bed. They will love reading about how John Wilkes Booth was locked inside a tobacco barn, which was then set on fire after he refused to come out. And how people filed past Lincoln's coffin in New York City for 25 hours straight, and yet only a small portion of the half million people waiting actually got to see the body. Or of how city leaders tried to stop African Americans from participating in the funeral procession back to the train station, and the Secretary of State had to issue a decree.

So many rich stories. So much history. I love that this book is one in a series of five (so far). I hope there will be lots more!
Posted by Carol at 8:31 PM

I am a huge Don Brown fan. He was one of the authors at the Dublin Literacy Conference last year. Fascinating man!

This sounds good, Carol. I have Lincoln's Grave Robbers, & know students will be interested in your book.