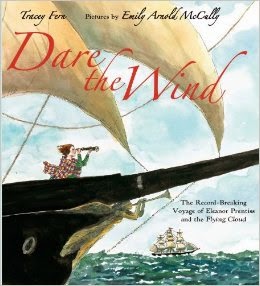 Here's a picture book biography to add to your brave girls basket! Ellen Prentiss, born in Marblehead Massachusetts in 1814, was the daughter of a schooner captain who taught her how to navigate his boat, warning her that a true navigator must always have the "caution to read the sea as well the courage to dare the wind." When Ellen grew up, she married Josiah Perkins Creesy (Percy) and became his navigator, helping him sail the trade routes to China.

In the late 1840's, the California Gold Rush started, and people were anxious to get from the east coast to the west coast quickly. The land route took six to eight months, as did the route in large sailing ships. A new kind of ship, called a clipper, could navigate the route more quickly. Percy became captain of The Flying Cloud, and with Ellen navigating, sailed down around Cape Horn and back up the coast of South America to San Francisco in 89 days. This book captures their journey.

Emily Arnold McCully's illustrations make the reader feel like she is right there on wind-tossed schooner! End pages show the map of the ship's route, while an author's note and glossary add a little extra detail. Interested readers are given other books and websites for further research. 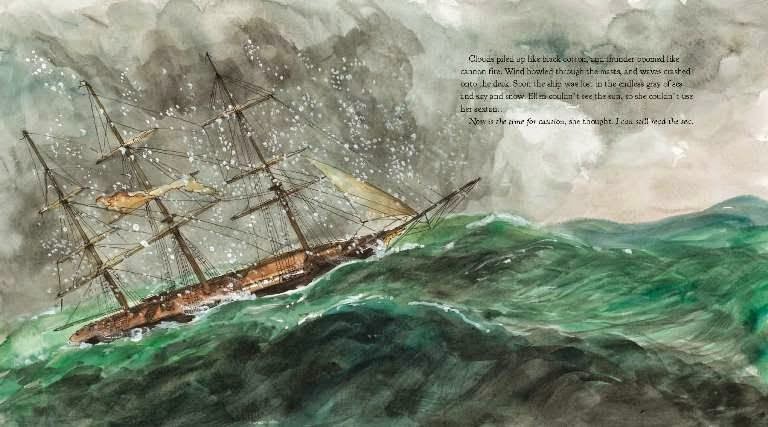 This sounds wonderful! The illustrations remind me of Winslow Homer painting.

My son was ship-crazy for a while when he was younger. This would have been a perfect book to share with him. What an adventurous spirit she had!