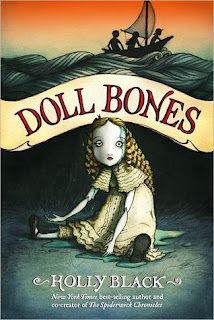 Finally, a weekend at home, and a little time to read, after three consecutive weekends away. DOLL BONES has been in my stack for several weeks. It moved to the top of the stack this week, when one of my seventh grade friends asked me for a scary book.

Zach, Poppy, and Alice have been friends for a long, long time. For years, the trio has used dolls and  action figures to create an elaborate fantasy world, which involves queens and mermaids and pirates and all sorts of mythical creatures. The ruler of this world is the Great Queen, a bone china doll locked in a curio cabinet in Poppy's house.

It turns out that the Great Queen has a story all her own. And it's creepy, really creepy. The Great Queen was created by an Ohio china maker when his young daughter tragically died. He couldn't bear to put her ashes into the ground, so he crafted a doll, then put the little girl's ashes inside of her. And now the doll is coming to life, and wanting to be buried in her rightful place with her family. It's up to Poppy, Zach and Alice to get her there.

I expected this to be a scary book. And there definitely is that element. DOLL BONES has just enough creep factor that kids are going to love it. What I didn't expect, however, was that DOLL BONES is also a coming of age novel.  It's a novel about putting aside childhood and moving into adolescence. It's a novel about friendships between boys and girls. And it's a novel about accepting change.

DOLL BONES is a novel that I needed when I entered junior high and discovered that everyone but me was wearing makeup. And it's a novel that our seventh graders, who used to play an elaborate game of tag every single recess, but now spend their recesses leaning against the chain link fence pretending to have fun doing nothing, really need right now.

Mostly, I think it's a book that my sixth and seventh graders are absolutely going to love.
Posted by Carol at 4:20 AM

I have it, still haven't read it, but those extra points you just made make me put it further up the pile, Carol. I know those kids so well, and wish they were still playing with toys! Thanks!

How you accomplish all you do, how you so generously and gorgeously share your reading with all of us - I marvel at your wisdom and treasure your heart! :) Thank you for another invitation into the world of your incredible library and reading adventures, Carol xo