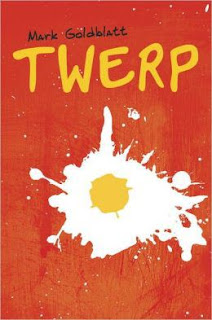 Eighteen months ago, Rebecca Palacio's WONDER swept kidlitosphere by storm. Everyone was reading it,  and talking about it, and buying it for friends. I just finished TWERP, by Mark Goldblatt, and can't believe that this book won't have a similar effect. TWERP, I think, would provide an amazing platform for talking about bullying. (My friend, Kyle, talks about TWERP through this lens at THE BOY READER).

The main character in TWERP is Julian Twerski, a sixth grader, who has just returned to school after a week's suspension for an incident that involved Julian, his buddies, and a child in the neighborhood. His English teacher, Mr. Selkirk, gives Julian an assignment- he needs to write something about the incident, and it needs to be long. Mr. Selkirk believes writing will help Julian understand the incident- Julian  doesn't think that's true, "If I don't understand something, how can I write about it?" Julian's writing, which eventually fills multiple composition books, becomes the framework for TWERP.

Goldblatt (whose writing reminds me of Gary Schmitt) does an amazing job capturing the life of a sixth grader- friendships and fights with friends, peer pressure, relationships with the opposite sex, and athletic prowess. It's laugh-out-loud funny in lots of places,  and yet, it's also a book I can see middle schoolers finding tremendously comforting, one of those, "Phew, other people really do feel like I do" kind of books.

And then there's the incident- in which Julian and his friends were incredibly cruel to a special needs child in their community. Snippets of information are threaded throughout the book, but Julian waits until the last chapter to reveal what really happened.

I'm meeting with a sixth grade teacher this week. You can be sure I will be recommending TWERP as a first read aloud. It's a book I think every middle schooler needs to read.
Posted by Carol at 9:53 AM

Thank you so much for this review. This book is next on my TBR list and it's a consideration for a read aloud in my sixth grade class. Can't wait to read it now!

I've been seeing more and more about this book, Carol, & I will count on your review to cinch my purchase of it. It does sound good, and I love Gary Schmidt's books, so if it's similar, I know it'll be good. Thanks!

This looks like a wonderful book, Carol. Thanks so much for sharing!