JULIE ANDREWS' TREASURY FOR ALL SEASONS 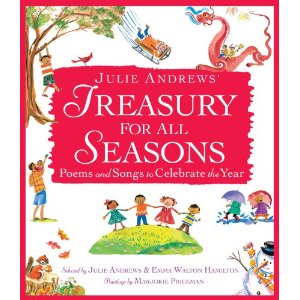 To be honest, I'm generally not a big fan of celebrity authors. When I saw Julie Andrews' TREASURY FOR ALL SEASONS: POEMS AND SONGS TO CELEBRATE THE YEAR on the CYBILS list, then,  I was not expecting much. I was very pleasantly surprised. The anthology, consisting of approximately 150 poems collected by Andrews and her daughter, Emma Walton Hamilton (they even wrote a few) is terrific, one I would definitely love to own or give as a gift.

TREASURY FOR ALL SEASONS  contains a variety of poems to read throughout the year. First, there are 8-10 poems for each month of the year. Many are traditional, ranging from Longfellow and Coleridge to e.e. cummings and Robert Frost, but there are also many contemporary poets (e.g. Sandra Cisneros, Barbara Juster Esbenson, Bobbi Katz, Myra Cohn Livinston, Valerie Worth). November, for example, includes:
Within each month, there are poems for pretty much every holiday, all the ones you'd expect, but also others--  Martin Luther King, Jr. Day, Chinese New Year,  and Grandparents Day. There are also poems for religious holidays such as  Ramadan, Purim, Rosh Hashanah, Hannukah, and Kwanzaa.

Andrews and Hamilton also include  ections for other holidays or occasions, including The Sabbath/Shabbat,  Birthdays, New Babies,  and Coming of Age/Rites of Passage. Many of the sections begin with a letter from Julie Andrews, explaining why they chose certain poems, or making personal connections. These letters would be good mentor texts if kids were trying to assemble their own poetry anthologies

I also love the layout of this book. Most poems have their own page or two-page spread, so there is plenty of "breathing room" on each page. Marjorie Priceman's illustrations are gorgeous- vibrant, joyful, bright and flowing.

Adding this to my repertoire of gift books- it would be perfect for a baby shower, or family Christmas/Hanukkah gift, or for a student teacher or mentee, who was just starting a collection of poetry books.
Posted by Carol at 5:16 AM

I shared with you that Julie Andrews was my Room Mom at the American School in London, right? :) Love to gain your book recommendations! xoxoxo How fun that this one is from my ye 'ole Room Mom! :) xoxox You rock :)