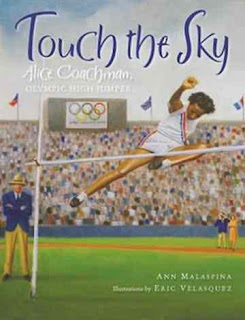 Gabby Douglas, the spunky sixteen-year-old that won the Olympic gold in gymnastics,  has received a lot of attention in the last few days, and well she should. Douglas' accomplishment is huge and definitely noteworthy. She stands on the shoulders, however, of other African American woman, including Alice Coachman, the first black woman to win an Olympic gold medal. Ann Malaspina has captured her story in a new picture book biography  TOUCH THE SKY: ALICE COACHMAN, OLYMPIC HIGH JUMPER.

Alice Coachman grew up in Albany, Georgia in the 1930's. Her family, like so many others, struggled with poverty and discrimination. Alice, born a runner and jumper, was often disciplined by her father for her "unladylike behavior."  Teachers introduced Alice to track and  bought the running shoes, shorts, and bright white socks that she wore to compete in her first meet. From there, Alice went on to compete with the Tuskegee Golden Tigerettes, then win a gold medal in the high jump at the 1948 Olympics (held in London).

I especially love the format of TOUCH THE SKY, a picture book set up with poetry-like line breaks similar to a novel in verse. Every few pages, the first line is different and much larger font,  almost like a headline, signaling a new time and place for the reader. I'm thinking this format would be really helpful for students learning to write biographies. Besides the original story, the back few pages of this book are a kind of photo essay, where five photographs from key points in Coachman's life are accompanied by paragraphs of text.  Students could start by doing an illustrated timeline of key events, then write text to go with their illustrations. Perfect for a multi genre study!

TOUCH THE SKY would also be great in a unit on perseverance, or African American history, or women in sports, or the Olympics.  You know I am going to be sharing it with teachers this fall.
Posted by Carol at 9:58 AM

This looks terrific, Carol. I agree that it should be on our lists to help follow up on the Olympic stories, & especially Gabby Douglas. Thank you!