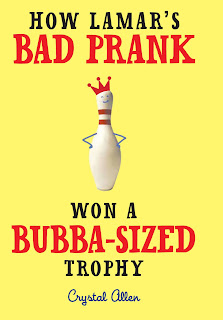 We are two days from the end of the school year. I should be doing paperwork because I'm buried. Or unloading boxes from the car because I'm moving schools and the back of my car is full of books. Or even doing dishes, because my dishwasher is broken for the third time in six weeks. But I'm not. Instead, I've been reading, because I just found a terrific new novel by a first time author. Listen to this great lead:
Since Saturday, I've fried Sergio like catfish, mashed him like potatoes, and creamed his corn in ten straight games of bowling. And it's just the middle of the week. People call Wednesday "hump day," but for Sergio it's "kicked in the rump day." I'm his daddy now, the maddest, baddest, most spectacular bowler ever.
That's the voice of thirteen-year-old Lamar, the King of Striker Lanes Bowling Alley. Unfortunately, Lamar is also the brother of Xavier, "the Basketball Saviour," an all-star player who dreams of going to the NBA, if he can only pass his algebra class. Lamar and Xavier's mother has recently died and the two boys are being raised by their dad, who is much more impressed by his older son's basketball trophies than his younger child's bowling abilities.
Xavier is not a very nice big brother and finally Lamar has had it. He teams up with the town punk to pull off a get-even prank, which quickly backfires and alienates his brother, his long-time best friend Sergio, and his girlfriend, Makeda, not to mention the rest of his basketball loving town. Lamar has to figure out a way to get himself out of all of the trouble he has caused.
LAMAR'S BAD PRANK is an almost perfect middle school novel. It's laugh out loud funny (in some places the voice almost reminded me of WATSONS GO TO BIRMINGHAM), but also a great story of sibling rivalry, and of a kid who makes a mistake and has to fix it.
A terrific read. I hope Crystal Allen has something else coming out really soon!
Posted by Carol at 8:10 PM

I will need to get this. It sounds great. Last day of school.

I hope I don't freak you out by writing a comment about your review of my book. Thank you for your comments. I'm so glad you enjoyed LAMAR! As for a second book, I am working on another story, however, it's in the early stages. But I'm so glad you're already interested in reading it!

Have an awesome summer.