A FRIENDSHIP FOR TODAY- Patricia McKissack 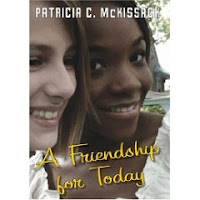 The year is 1955. The Supreme Court has ruled against segregation and twelve-year-old Rosemary Patterson is about to start sixth grade at T. Thomas Robertson Elementary School. Rosemary's best friend, James Jonson Stenson (or JJ for short) is supposed to attend with her, but then he gets polio, and ends up spending the year in a rehab hospital instead. Rosemary is the only black girl in her class, and she must face the stares and unkindesses  of many of her peers.
Things are not so great at home either- Rosemary's mom and dad are fighting a lot, eventually, her father moves out, and her parents divorce. Rosemary's main source of solace is a Rags, a half-dead stray cat she finds run over on the railroad tracks and nurses back to health.
Gradually, Rosemary becomes friends with Grace, a white girl whose very southern father is not at all in favor of integration. It is an unlikely friendship, formed by two girls who desperately need someone to hang onto.
In a note at the end of the book, McKissack tells readers that although the book fiction, it is loosely based on events from her own life. She really was the only African American girl in her elementary school. Her mom and dad break up. And the book is dedicated to her cat, Rags, that kept her going through this very difficult time.
This is not the best book I have read on this time period, but it's definitely a good story and a relatively fast read. I could see putting it in a text set with books like YANKEE GIRL, NEW BOY, and WATSONS GO TO BIRMINGHAM.
Posted by Carol at 9:20 PM