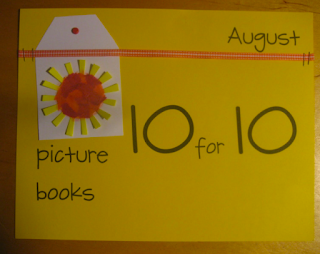 Picture Book 10-for-10 is one of my favorite days of the entire year! It's the day I have to hide my debit card, so I don't go totally out of control buying all of the new books that people share. Some years I am wonderfully clever, and actually have a theme. This year I'm just sharing some books that I am looking forward to reading when school starts next year. You can check out a zillion great collections (remember to hide your debit card first!) in the Google PB 10-for-10 community. 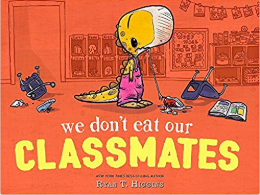 WE DON'T EAT OUR CLASSMATES
by Ryan T. Higgins
When Penelope Rex arrives at the first day of school, she discovers that all of her classmates are children. She eats them, because children are delicious. The next day she goes back with good intentions, but again accidentally eats a classmate. It takes Walter, the class goldfish, to teach her an important lesson. Thanks to the ever brilliantTamara Jaimes for sharing this one with me! 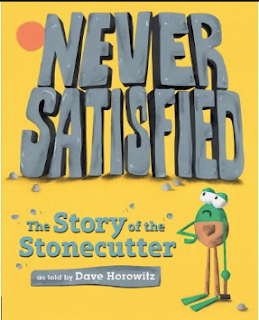 NEVER SATISFIED: THE STORY OF THE STONECUTTER
as told by Dave Horowitz
Once there was an old stonecutter named Stanley (who just happens to be a frog). He was good at his job, but stonecutting was hard and Stanley wanted to do something a little easier. On the way back from the quarry, one day, he noticed a businessman sipping tea, and wished he could do that. And somehow magically he was a businessman, and then the king, and then he got tired of that and wanted to be the sun and, well you get the picture! Be sure to read the author's note at the beginning 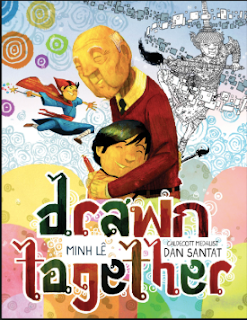 DRAWN TOGETHER
Minh Le and Dan Santat
An Asian grandfather babysits his very assimilated American grandson. At first, the two don't seem to have much to say to each other, but then their sketchbooks create common ground. 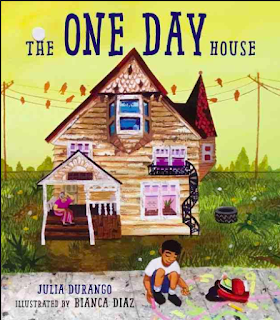 THE ONE DAY HOUSE
by Julia Durango, illustrated by Bianca Diaz
Every time Wilson goes to visit his grandmother, he makes a promise about all of the things he wants to do to her old rundown house. Gigi assures him that she is just fine, and that he is enough for her. Wilson also tells other people, including the ice cream man and the librarian, about Gigi's house, and one day the community arrives to help. 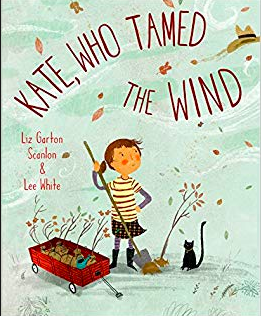 KATE, WHO TAMED THE WIND
by Liz Garton Scanlon and Lee White

Once there was a man
living all alone in a creaky
house on the tip-top of a steep hill.

All is well until the wind starts to blow.

The man is sad until a little girl named Kate arrives and plants trees. A lovely cumulative picture book about our ability to take care of our world and about  the power of trees. 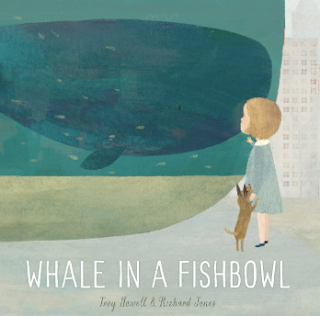 WHALE IN A FISHBOWL
by Troy Hall and Richard Jones

Wednesday the Whale lives in a fishbowl. One day, a little girl named Piper approaches the bowl and tells Wednesday that she's lovely, but that she doesn't belong in there. Her words give Wednesday the courage to try something new. Pair this one with Dan Santat's AFTER THE FALL. 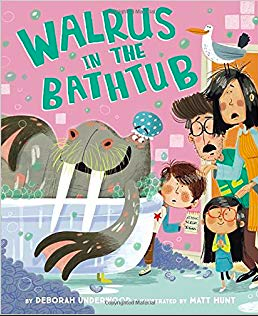 WALRUS IN THE BATHTUB
by Deborah Underwood, illustrated by Matt Hunt
A family moves into a new house, only to discover that there is a walrus in the bathtub. The funnest part of this book is that each page is a different list, e.g. Bad things about having a walrus in the bathtub: 1) Clam shells  2) Screechy seagulls, 3) Bathtub tidal waves. A few pages later: Ways to try to get a walrus out of the bathtub: 1) Have a clam giveaway  2) Dress up like a killer whale  3) Dress your dad up like a lady walrus. 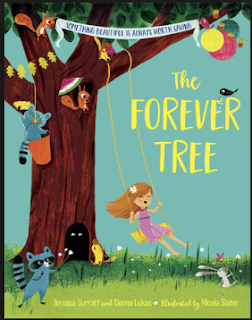 THE FOREVER TREE
by Tereasa Surratt and Donna Lukas, illustrated by Nicola Slater
A beautiful story about the never-ending life of a tree. Based on these Wisconsin authors actual experiences-- a tree on Surratt's property is first home to animals, then a little girl's rope swing, built by a loving grandfather. Finally the tree succumbs to Dutch Elm disease and the community comes together to build a tree house around its trunk. 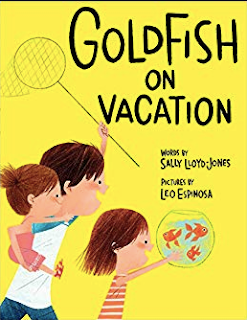 Three goldfish, Barracuda, Patch, and Fiss, live in a tall apartment building that overlooks an old broken-down fountain. One summer, a man arrives to fix the fountain, and then invites all of the goldfish  in the neighborhood to go on vacation for the summer. An author's note says that this is based on an actual fountain, the Hamilton Fountain, in New York City. 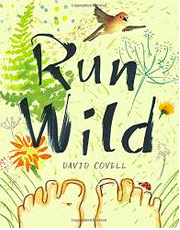 Hey, you.
Sky's blue!
(forget your shoes)
OPEN
that door
and…

Sprout, you're out!
Chase the wind
can you grab it?
A joyful, rhythmic poetic picture book about a child playing outside on a barefoot summer day.
Posted by Carol at 5:51 AM

My granddaughter and I just read Whale In A Fishbowl this week, & then read it again. What a sweet story! I do love Drawn Together, hope many have and share that book! I'll look for others I don't know, Carol. Never Satisfied sounds great! Thanks!

Great list! I just ordered Walrus in the Bathtub from the library. Thanks for sharing and have a terrific school year!

You've got some new-to-me books on your list! Good thing I have the library tab open and not Amazon!

I don't need to hide my debit card since I'm a heavy library user. And then, if I really fall in love with a book, I may add it to my collection. But these days, I'm trying to declutter (yes, even the books in my life). Lots of new titles for me from your list. I picked up Whale in a Fishbowl from the library yesterday (from someone else's list), but all the others are new to me. Even though I've read about Drawn Together many times, I still haven't picked up a copy. Headed to request some new-to-me titles. Thanks, Carol.

So many books to love here, Carol. I'm on my next round of posts and books. You know that every title you shared that I haven't seen I requested. I'm especially excited about The One Day House. I'm a sucker for grandma stories. Thanks for joining the conversation.