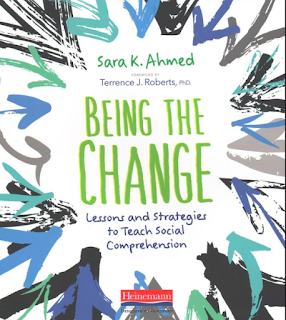 I'm participating in CYBER PD, which I have done almost every summer for a number of years. This week, we are reading, BEING THE CHANGE: LESSONS AND STRATEGIES TO TEACH SOCIAL COMPREHENSION by Sara K. Ahmed.

I'm excited about the book, because this year I will have my own classroom, at least half time this year. I'll be teaching three sections of sixth grade language arts. My school is K-8, Dual Language. Since I started there, six years ago, we have always had two sections of every grade. This year, the primary grades are down a little, and the demand for our middle school was high, so we added another section of sixth grade. That means that approximately 45 of my students will have been together and known each other since kindergarten, and the other 20 are brand new to the school.

There is also a socioeconomic factor at my school. The majority of our existing students are working class poor. Many of our new students have come to the school because their families are interested in our dual language model. These students tend to be more middle class. They do interesting things on weekends,  go on vacations, have the cool toys that show up on television.  I suspect that this will also play a role in our classroom dynamics.

I also know that middle school is a hard, hard time physically, socially, and emotionally. I want to do all that we can to make every single kid feel comfortable and valued and loved and accepted and honored for who they are as a human being. I want to make sure that kindness is something that every single kid values and practices every single day.

For these reasons, my teammate and I know we are going to have to spend a great deal of time building community. I'm grateful then, for the suggestions in the book. I know I will use a lot of them. I especially love the ideas in chapter two, thinking about how to teach kids to "Listen with Love." That's an area I really want to work on this year.

One part of the book, however, did leave me with huge concerns. I'm going to address that in this next section.

Names: A Cautionary Tale
Once upon a time there were two little boys. The little boys had traveled an extremely rough road. Their own mama couldn't take care of them, so they ended up in a variety of less than savory situations. For a few months, they even slept in someone's garage. Finally, they ended up in the care of an evil queen. There wasn't enough food. They slept on mattresses on the floor. They were little and afraid and they sometimes wet the bed.  And then she beat them. Eventually, their principal found out. And they were taken out of that situation, and went to live somewhere else. At the new house there was food, lots of it. And there were toys and bicycles and a dog named Maggie who licked people's faces when they were sad. And things weren't perfect, but they were definitely much, much better.

Deep down inside, the boys knew that theirs was not an ordinary family. There was no dad. And their new mom wasn't a typical mom. She was a little older than most moms. And she didn't look anything like the boys. She was very short, and they were both tall and strong. She was white, and they had rich chocolate brown skin. When kids asked them about their family, they usually tried to change the subject.

And then there was that name activity. It always happened the first week of school. "Tell us about your name. Where did your name come from?" These boys had strong and wonderful names. Isaiah was one of the four major prophets of the Old Testament, and there's a whole book in the Bible named after him. Kadeem is a Muslim name. People with the name Kadeem are "very versatile, idealistic and intuitive. They are bold, independent, inquisitive and interested in research."

The problem was, the boys had no idea why their biological mother, the person who named them, had picked these names. They didn't know the story of their names, and they didn't have any way of finding out. And it always caused problems that first week of school, when the "tell the story of your name activity came up." Their mother wrote down the generic stories behind their names, and put them in their backpacks that first week of school. She told them that they could talk about how their hyphenated last name had come to be, they knew that story well. They didn't want to do that. They wanted a first name story, just like everyone else's name story. And that made the first week of school really, really hard. Sometimes there were even behavior issues, because it was easier to draw attention in a different way than to admit that that they didn't know the story of their names. They were excluded from the classroom community from Day One.

People who know me have probably figured out that the boys in this story are my sons. They were students at my school, and I adopted them, from the foster care system, at ages 7 and 9. We didn't know the stories of how/why they were named, and we didn't have any way of getting those stories. And it made for some really hard times. More than once, I got bad behavior phone calls the first week of school.

I don't know how I would address the name issue. I fully agree with Ahmed, that names are important. I work hard to learn kids' names, even before the first day of school. Most of my students are Hispanic, and in that culture, the child retains the name of both their mother and their father. I encourage my students to use their full last names, to honor both parents. I think it's incredibly important to pronounce peoples' names correctly.

I also know, though, that there are kids like my sons, who come from a hard background, who don't know the stories of their names, or who find those stories painful, and who would rather not remember or talk about their names. I don't know, then, exactly how I will approach this activity, but I know it will look very different in my class. We might look up what their names mean, but we probably won't do the "tell where your names come from." Not unless I can think of a different way to do it, that doesn't exclude kids who have already had a hard time in life.

Social comprehension. So important and yet so very complex....
Posted by Carol at 7:05 AM

Thanks for sharing your thinking about the story of your name activity, Carol.

I wonder if it would be better to emphasize, “tell others the story of your name that you want people to know” and de-emphasizing the ask-at-home/family connection?

In the mentor text, the narrator spends the three middle of paragraphs of “My Name” telling how she doesn’t want to be like the great-grandmother she was named after. But the first and final paragraphs focus on what the narrator thinks of her name in the here-and-now. Students who have names with special family significance will probably bring that up organically in their pieces, I would imagine. But as we’re teaching/modeling, maybe it would make sense to emphasize what significance about their names our students want to claim for themselves? What’s meaningful to them? As Cisneros has the narrator do in the first and final paragraphs.

Thanks for bringing up a range of perspectives.

Carol, I'm looking forward to reading your stories from the classroom this next year. I highly recommend Jacqueline Woodson's new book, Harbor Me as a possible read aloud. Check it out, available in Aug.
Thanks for your thoughts on the name exercise many use at the beginning of the school year. You have an insight into this issue that many have never considered. Thanks for sharing.

Carol, I agree, you can disagree with the author! You have first hand knowledge of how the name story can be painful. However, I like Tamara's thinking and focusing on what you know and want to share. I know many of my students would have no idea about their name ... maybe they share what they like about it or find the meaning of the name. I think there are ways around it. We want to emphasize the importance of a name, lift them up, be proud of this identifying factor. Thank you for your honesty and sharing your story. As always, so happy you are here sharing your voice!
~Michelle

Thanks for sharing that perspective! I had a problem one year because a few people had interesting stories about their name but most just had their names chosen out of a random list. There was no story, and they felt left out. I haven’t done it since. My name is simply one of the popular names the year I was born...nothing special to talk about!

First let me say how thankful I am for your perspective here. someone with your experience & your boys know well the cautionary tale here. You teaching us all this is something that social comprehension brings to light, we have to approach with a learning stance and say we don’t know. I definitely don’t know. So thank you for adding to my understanding of how a lesson like this is not a one-size-fits all lesson. That was never my intention for any of these lessons as you all know your kids the best, and why I ask teachers to do the work yourselves first so you can anticipate what I can’t. Thank you for being a leader in the field and an advocate for kids everywhere. Sara Ahmed