BENEATH A SCARLET SKY by Mark Sullivan 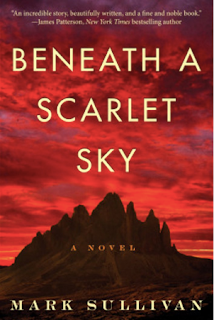 I have spent the last few days devouring BENEATH A SCARLET SKY by Mark Sullivan. The book is marketed as fiction, but is really more a narrative nonfiction. In the author's notes at the beginning of the book, Mark Sullivan says that the book is based on the life of Pino Lella, and set in Italy during WWII. Because so many documents were destroyed at the end of WWII, and because so many of the people involved have since passed away, Sullivan couldn't verify many of the conversations. For that reason, it's considered fiction.

When the book opens, Pino is 17. The Nazis have just begun attacking Italy and Pino and his younger brother Mimo narrowly avoid being killed in a theater that is bombed. Shortly after that, their parents send them to the border of Italy, to stay at a Catholic boys school. There, Pino is responsible for helping many Jews cross through the Alps to Switzerland. When he gets close to 18, his parents summon him back to Milan, and encourage him to enlist in the German army, so he won't be drafted and placed on the front lines. Through a fluky train of events, he becomes a chauffeur to one of highest ranking German officers. This allows him access to some of Germany's deepest, darkest secrets, which he then passes to the Italian Resistance.

I love historical fiction and narrative nonfiction, but had read almost nothing about Italy during this era. I learned a lot, then, in reading this book which is right up there, for me, with Anthony Doerr's ALL THE LIGHT WE CANNOT SEE, which is one of my all-time favorites.
Posted by Carol at 4:06 PM