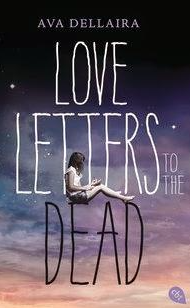 I love when kids recommend books to me! An eighth grade girl at my school has read every novel in verse I could find, and has now moved on to other things. Her cousin, who is in high school, got LOVE LETTERS TO THE DEAD from her school librarian, and P read the first chapter, then came to school the next day and asked if we had the book in our school library. We  didn't, but I found it that night at the public library, and took it to her. She read it, then told me I needed to read it too, because it was the best book she had read in a long time.

When the book opens, the main character, Laurel, is just starting high school. Her older sister, May, died at the end of the previous school year and Laurel has elected to go to a new school, out of district, because she doesn't want people asking questions about her sister. The first week of school, Laurel's English teacher has the class write a letter to a dead person. Laurel writes her letter to Kurt Cobain, but doesn't turn it in.

The book, told through letters to people like Janis Joplin, Judy Garland, River Phoenix, and Amelia Earhart, captures Laurel's first year in high school- her relationship with her grief-stricken father, and with her mother, who has abandoned her and moved to California, her first boy friend, the lesbian couple who become her best friends. Most of all, it captures Laurel's coming to grips with her older sister's death.

The book is packed full of big life truths:


Nothing is worse than when someone who is supposed to love you just leaves.

When we are in love, we are both completely in danger, and completely saved.

You think you know someone, but that person always changes, and you keep changing, too. I understand it suddenly, how that's what being alive means. Our own invisible plates shifting inside of our bodies beginning to align into the people we are becoming.

You can be noble and brave and beautiful and still find yourself falling.

Maybe when we can tell the stories, however bad they are, we don't belong to them anymore. They become ours.

I probably wouldn't give this to anyone much below eighth grade, but definitely a terrific read for the older teen set!
Posted by Carol at 8:26 AM

So great to run into you today, Carol. We must get together this summer. This book does sound wonderful, & clever, too. I'll put it on the list! Have a great week!