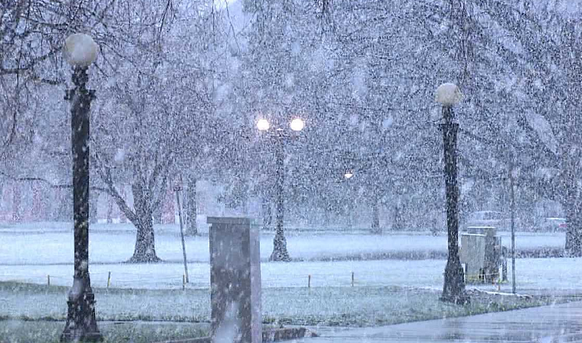 My large urban district, rarely, actually almost never calls a snow day. The plowing teams are terrific, we don't have any rural schools, and our parents, mostly working poor, depend on us not only to educate their children, but also to care for them during the day, and feed them breakfast and lunch.

Yesterday was different. It's been snowing off and on since Monday and there's more than a foot on the ground (I know people on the East coast have a lot more). For some reason, the superintendent decided to call a snow day, but he didn't do it until after six. By that point, I was already on my way to school. This is an abecedarian,

"Anatomy of a snowy morning"

Alarm goes off extra early, I lay there
Building the day’s schedule
Checking agendas for five vertical team meetings, and tonight’s two hour inservice
Dreaming dogs groan as I
Exit that haven of warmth and head to the cold kitchen
Feels like -5, according to weather channel, even though it’s actually a balmy zero
Gotta shovel the six inches of snow that have fallen overnight
Helping to make this February the third snowiest on record
Icy sidewalks, icy windshield, icy cold car
Just doesn’t want to warm up and I
Keep counting pennies, contemplating sandy beaches while wiggling frozen toes
Longing for lavender tulips and yellow daffodils,
Major thoroughfares are clear as I
Navigate the nearly empty early morning streets with
Only a few slip and slides arriving at school
Parking lot empty except for lunch ladies and one first year teacher
Quiet school is waiting and I think there
Really should be a few more people
Starting to arrive, until custodian appears and
Tells me the superintendent has called a snow day
Up until 6:00 when I left home it was
Very cold, but the district website said the buses would be running
Why wouldn’t there be school
eXtreme cold and a minor blizzard never stopped us before
Yawning, I head to my office thinking


Zealous early birds do not always catch the worm.

Poetry Friday is at Heidi's My Juicy Little Universe
Posted by Carol at 7:34 AM

I was cleaning off my car when a colleague texted me-saw it on the website before we even got the call (we follow DPS). What a surprise, but a nice one. You're right, some did land at school! Nice sun today!

The evening news said Denver broke an100 year record for the snowiest February! I thought of you and Linda B. My favorite line..."Feels like -5, according to the weather channel,even though it's actually a balmy zero." Ha! It is all brrrr....to me. I hope you went back home or had a fun adventure with your unexpected snow day. A wonderful poem came no matter!