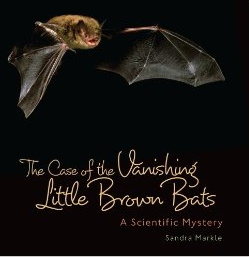 Little brown bats were once among the most common bat species in North America. They are an important part of our ecosystem, eating insects that kill crops and spread disease, such as West Nile Virus. In recent years, however, the brown bat population has taken a huge hit, to the point that scientists are considering whether this bat should be put on the endangered species list.

Sandra Markle's newest book, THE CASE OF THE VANISHING LITTLE BROWN BAT follows scientists as they try to solve the mystery of what might be killing the bats. Markle explains how scientists rule out global warming, pesticides, and several different viruses in a way that is not only highly informational, but also story-like and engaging to read. The text is accompanied by gorgeous up-close photography that readers are going to love. End matter include an author's note, fascinating facts, ways people can help in the bat conservation effort, a glossary, and additional resources.

Thanks for featuring, Carol - sounds like a terrific book. I recently met a bat expert/wildlife rehabilitator here in my new coastal digs; she had a couple of little brown bats which were rescued and now are part of her educational outreach. Fascinating, wonderful creatures.