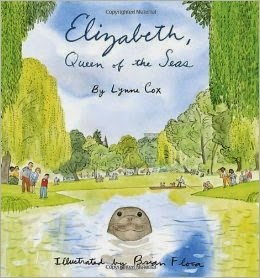 There was once a lovely elephant seal who lived in the city. Most elephant seals live in the ocean, in salt water. They sleep on rocky coasts and lie along sandy beaches. But this seal was different. She swam in the sweet, shallow waters of the Avon River where it lowed through the heart of Christchurch, New Zealand

So begins the true story of  Elizabeth, an elephant seal that somehow ended up living on the banks of the Avon River in Christchurch, New Zealand, in the 1970's and 80's. Elizabeth loved hauling herself up the bank of the river and laying on the warm road. The people of Christchurch were worried that she would be hit by a car and hauled her away from the city. Three times they took her out to sea,to live in other colonies of elephant seals, but Elizabeth just kept returning to the park she knew as home. Finally the citizens of Christchurch decided to let Elizabeth stay where she was happiest.  Brian Floca's watercolor illustrations are a perfect accompaniment to this engaging story.  End matter includes information about elephant seals.